Review: "Bubba and the Cosmic Blood-Suckers" by Joe R. Lansdale 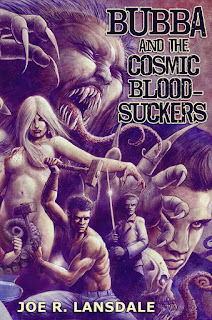 For some reason, total absurdity piques my interest almost every time, so I couldn’t resist Joe R. Lansdale’s “Bubba and the Cosmic Blood-Suckers” ($40, Subterranean Press). I was, of course, familiar with Lansdale’s other tale of monster hunter Elvis, “Bubba Ho-Tep,” from the movie starring Bruce Campbell. Even if I hadn’t been, though, there would have been no way I could pass up the title or description of this book.

“Bubba and the Cosmic Blood Suckers” is a prequel to “Bubba Ho-Tep,” with an aging early 1970s Elvis beginning to lament his choices to make cheesy films instead of focusing more on his music. Part of the reason for that choice, though, is his other occupation as a monster hunter for a secret government organization.

Elvis has been coerced into the role by Colonel Parker, his ruthless manager in more than one business for the purpose of this story. The Colonel holds Elvis’ mother’s soul in a gris-gris bag, keeping her from passing over to the other side and using her to blackmail The King into killing monsters.


The team that he works with is just as absurd. Included are a hammer-wielding descendant of folk hero John Henry who shares his ancestor’s name, a young pop star named Jenny (stage name Raven) who seems to be the one woman who won’t succumb to Elvis’ advances, a psychic called the Blind Man, the strategist Jack, and Elvis’ right-hand man Johnny, who is the only member of the King's entourage who knows the secret. Johnny tells us much of the tale.

The team is called to New Orleans, where there’s a strange pack of other-dimensional vampires holed up in a junkyard that was formerly the set of one of Elvis’ movies. They may prove to be the match for the country’s best team of monster hunters.

The story is ribald and, yes, a bit goofy, but it’s fun for what it is – a pretty typical vampire/monster hunter story. Would I have been as interested if not for the Elvis angle? Probably not, but it was still entertaining.

“Bubba” is a quick read. Lansdale’s language is sparse and to the point. At times, that’s refreshing. In an age where writers in the speculative genres can take pages to describe the entrance to a city, Lansdale sums up his team’s surroundings on the Mississippi in a few quick sentences that, nonetheless, give you a visceral impression of the setting. It’s an apt description of the city, as well.

At other times, the style seems rather abrupt, leaving gaps that I want to be filled and moving events at a faster pace than seems reasonable. Of course, what’s really reasonable about Elvis fighting cosmic vampires that roll their victims up into balls and stuff them into junk cars, right?

In the end, it’s a fun read that does set up its more-famous sequel. It’s my first experience with Lansdale, but I suspect that it’s not his best work and that I should explore his writings a bit further. There was much to like, even if I did come away not completely satisfied.