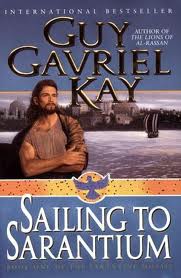 People had long recommended that I check out Guy Gavriel Kay by the time I got around to picking up "Tigana." I was sorry I'd waited so long. That's why I snapped up "Sailing to Sarantium" as soon as I saw it on the shelf. Unfortunately, my enthusiasm for Kay has now waned.

When the mosaicist Martinian gets an imperial summons to Sarantium, the most magnificent city in the world, he asks his assistant Crispin to go in his place. The reluctant traveler will face a number of perils, including a god, on the road. But that's nothing compared to the things he faces when he reaches the city.

I almost put this book aside after I was 50 pages into it and hadn't even reached the first chapter. You heard me correctly - 50 pages of prologue. Of course the essential information could have been condensed into less than 10. Kay follows that with a lengthy introduction of a courier, who then disappears from the story. True, he returns to play a role at the end, but he certainly doesn't deserve the intro he gets.

By about page 150, I was thoroughly disgusted. Then, Kay finally starts the story. Trim the first third of the book to a couple of chapters, and you've got a decent novel. In it's current form, though, the whole book seems like a setup for something. The problem is that Kay never gives the reader the payoff.

There is some remarkable imagery in the novel, and again, I find his historical approach fascinating. But those things weren't enough to salvage a story that never really got going.

For me, this book was terribly disappointing. I've heard some hardcore Kay fans say they like it, but I just didn't get it. 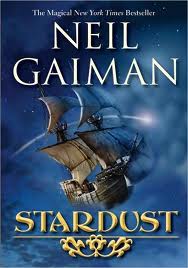 The town of Wall stands at the edge of Faerie, and no one ventures past the wall of the city, except during a festival that happens only occasionally. Tristran Thorn is different, though. He's in love with a village girl named Victoria Forester. One night they see a falling star and he vows to bring it to her. Tristran steps through the gap in the wall and into an adventure complete with ghosts, unicorns, witches and, oh yes, a fallen star.
I read this immediately after Orson Scott Card's "Enchantment," so I got my dose of fairy tale fare. Luckily I enjoyed both of them greatly.

Gaiman's "Stardust" is a rousing tale of adventure that takes everything I liked about his first solo novel, "Neverwhere," and improves on it.

This story features likeable characters and an interesting enough story, but what really makes it special is the way it captures the fairy tale atmosphere. The characters and settings are exaggerated and over-the-top just like the classic fairy tales, but at the same time Gaiman manages to avoid being cliched and silly.

After reading "Neverwhere," I was convinced Gaiman was going to do big things in the fantasy genre. "Stardust" only reinforces that belief. Whether you're a fan of Gaiman's comic work, or whether you've never heard his name, this is a book you shouldn't miss.