Review: "Harry Potter and the Prisoner of Azkaban" by J.K. Rowling 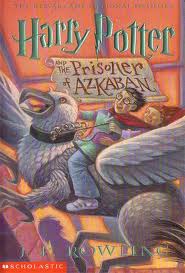 It's the third year at Hogwarts, but before school starts a prisoner named Sirius Black breaks out of Azkaban prison. Black was convicted of killing 13 people and linked to Voldemort. Now, he's after Harry.

A series of books has rarely captured my attention like this one has. After originally putting Harry Potter down as a passing fad, I'm now an addict.

Once again, Rowling has given us a delightful story with all the twists and turns of the first two. Snape and the Malfoys are particularly malicious in this volume and the new defense against the dark arts teacher, Professor Lupin, is quite a likeable sort for a change. Then there are the Dementors, foul things whose kiss means death.

I continue to be impressed with the way Rowling makes me root for Harry and his friends to win out. She also has a way of making you suspect everyone of being a "bad guy" in disguise. It makes for a wonderful read.

Another winner for Rowling. 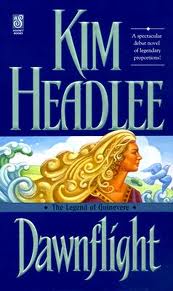 I’ve always been a fan of the Arthurian legends, and I thought I’d seen them approached in just about every possible way -- That is, until I read Kim Headlee’s "Dawnflight - The Legend of Guinevere."

Headlee takes the legendary characters Arthur, Guinevere, and Merlin, among others, and transforms them into believable historic figures. This book tells the story as it actually could have happened -- not behind the shining, pristine walls of mythical Camelot, but in our own world.

At its heart, "Dawnflight" is a love story, but don’t let that scare you away. This is no sappy, sentimental romance -- quite the opposite. It is actually a gritty tale of war and conquest, and not all of it is between nations.

Gyanhumara is a Pictish cheiftaness who is bound by a treaty to marry a Brytoni lord and ally her conquered tribe to the Roman Empire. She chooses Urien map Dumarec, one of her people’s worst enemies, in hopes of bringing peace. She soon regrets her choice. Some of her misgivings are due to Urien’s nature, but most are because she loves another man. She loves a man she once thought she hated above all others -- the conqueror of her people -- Arthur the Pendragon. That love could mean a civil war between Arthur and his arch-rival, yet unsteady ally, Urien.

Headlee says in the notes following the book that she feels Guinevere has gotten a "bad rap" in other tellings of the tale. Headlee intended to represent Guinevere a woman of "true power," and she has indeed succeeded. Chieftaness Gyanhumara is not a simpering lady of the court, nor a traitorous schemer as Guinevere has been portrayed in other versions. Instead she is a warrior-queen, as strong in will as in body.

She refuses to be subjugated by Urien, who obviously feels that no woman is even close to the equal of a man. Despite her revulsion, though, she still fully intends to honor her agreement to marry him. Her sense of duty to her people won’t allow her to do otherwise.

The events that follow -- as Arthur and Gyanhumara attempt to come together, despite seemingly the whole world being against them -- puts a whole new face on the classic tale of betrayal that leads ultimately to Arthur’s downfall in other adaptations. Definitely food for thought for any fan of the Arthurian legends. This isn’t just another re-telling of those same stories. "Dawnflight" will make you re-think all the tales of Guinevere and Arthur you’ve ever read.

As for the writing itself -- it is superb. Headlee makes you care about her characters, and forget the countless other stories you’ve read about the same characters. She also has a knack for keeping the reader up past bedtime. The first night, I was able to put the book down, but once the action really started, it became tougher. Headlee has a talent for ending every chapter on a note that makes you say "just one more chapter before bed." Then, before you know it, it’s 4 a.m. and you’re beginning the final chapter.

On a personal note, this book came along at just the right time for me. When I started it, I was at a point where I didn’t think fantasy could excite me anymore. Then, I picked it up. It has been quite a while since I devoured a novel the way I went through this one, and even now, I’m planning on giving it a second reading very soon.

In these days when every fantasy has to be at least a trilogy or more likely a watered-down drawn out saga, it’s rare that I look forward to another series of books. In this case, I think “Dawnflight” is just the tip of Excalibur, and there’s a lot more to the tale. I look forward to hearing it, and I hope Kim Headlee will stay with them until they’re done.