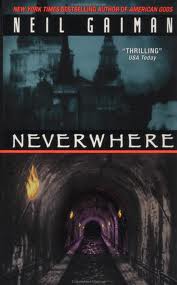 This book falls somewhere in between the old Beauty and the Beast television show, and Alice in Wonderland.

Richard Mayhew is an average guy with an average job and a nagging, but beautiful fiancee until he stops to help a girl he finds injured on the street. After that he gradually fades from our world and is forced to try to find his way through London Below to try to get his life back.

Though I felt it started a little slow, by the end of this book I felt that I had been on a wonderful journey. In addition to creating a world full of wonders in London Below - a place for those who have "slipped through the cracks" of London Above, Gaiman also introduces a cast of dynamic and interesting characters that all bring to mind the Lewis Carroll classic. From the flamboyant Marquis de Carabas, to the innocent Door to the insane assassins Croup and Vandemar, every character is just a little too eccentric and overdone, but rather than killing the novel, it actually makes it that much better.

I'm a fan of Gaiman's Sandman comic, and I also enjoyed his collaboration with Terry Pratchett, "Good Omens". This book shows a promising start to a career as a novelist for Gaiman as well. I'll be looking for his next one.