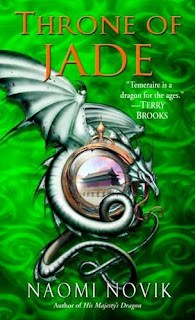 It's always nice when you get to read the books in a series back to back. Usually in fantasy series, you get hooked with the first book and then end up waiting a year or more for each installment, in the process forgetting a little about each world and story. So it was nice to see Naomi Novik's most recent two books in the Temeraire series, "Throne of Jade" and "Black Powder War" (both $7.50, Del Rey), follow hot on the heels of the first book, "His Majesty's Dragon."

I was truly impressed by the first installment, and immediately immersed myself in the second and third tales. For those who missed my review of the first book a few weeks back, Temeraire is a dragon intended as a gift for Napoleon from the emperor of China. His egg was intercepted by a British ship during the Napoleonic Wars, and he ended up bonded to the ship's captain Will Laurence.

In "Throne of Jade," the Chinese royalty have decided that Laurence is not fit to be a companion to a Celestial dragon, intended only for royalty. So he and Temeraire have been called to China, where they expect attempts to separate them from each other. In the process, they find themselves embroiled in a struggle for power between the emperor who is open to communication with the Western world and a faction led by a prince who opposes Western influence.

Having struggled through their confrontation with the emperor of China, Temeraire and Laurence expect to soon return to England in "Black Powder War." Temeraire, much to Laurence's dismay, is excited about the possibility of bringing the living standards of England's dragons up to those of China's, who are treated as equals, and often betters, by humans. Instead, they get an urgent missive ordering them to go to Istanbul to retrieve three dragon eggs purchased by the British government. Their ship damaged by a fire, they are forced to travel overland where they face not only the challenge of the journey and ongoing war, but also a Celestial who feels wronged by them.

I love dragon tales, and Novik's books are easily the best dragon stories I've read in years. Hers is a rare and refreshing original take on dragons, imagining a hierarchy and community of dragons on a scale that has rarely been attempted.

Making the stories even better is the fact that Novik is also an excellent writer with the skills to bring her creation to life and make the reader care deeply about Temeraire and his captain. When you're reading a story where the characters are wronged and you find yourself trembling with anger at the injustice, you know the writer has crafted something powerful. It happened to me more than once during these books.

If you're a lover of dragon tales or a fan of historical military adventure (who can accept the existence of mythical beasts, of course), do yourself a favor at check out this series.