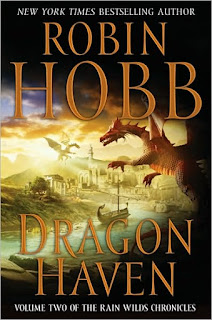 With “Dragon Haven” ($27.99, Eos), Robin Hobb continues her tale of a ragtag band of social outcasts and malformed dragons on their quest to find the mythical city of Kelsingra, where once dragons and humans lived in peace.

In the first book of the two-part series, “Dragon Keeper,” the dragon Tintaglia led a group of serpents from the sea to cocoon in the Rain Wilds and become dragons, a species gone missing from the world until Tintaglia herself hatched. But the dragons that came from this hatching were small and misshapen, pale imitations of the former glory the creatures once were. After they became a drain on the local towns, the leaders chose a group of young Rain Wilders, marked by their harsh existence with scales, claws and other unusual deformities, to lead the dragons to the ancient city in the creatures’ ancestral memory.

With the setup out of the way, “Dragon Haven” opens on the arduous journey, which finds both the dragons and their human companions growing, maturing and changing. Despite mounting tension among the keepers caused by their would-be leader Greft, who is under the influence of a hunter who has tagged along in hopes of bringing back dragon parts to sell, things seem to be going as well as could be expected. The dragons are growing stronger and more capable as they travel and hunt their own food, as are the humans that tend them. Things go awry, though, when a wall of acid-tainted water cascades down the unpredictable Rain Wilds River and slams into the expedition, dashing their boats and supplies and scattering them. The hardships in the wake of the wave spur the real change in both people and dragons. Secrets are revealed, new bonds are formed, and no one involved in the expedition remains untouched for good or ill.

In “Dragon Keeper,” Hobb presented dragons that were much more human than the average depiction of the mythical beast. Her dragons had weaknesses, failings and doubts, and were more relatable. In “Dragon Haven,” a metamorphosis begins that brings the dragons closer to the haughty, arrogant and proud race of creatures that you expect, but at the same time, there remain flaws that stand out like the chink in Smaug’s armor. Though the focus of the book remains with the humans, it’s almost more interesting to watch the changes that take place in the dragons and how they develop. Then again, it could just be because dragons continue to fascinate me after all these years, and I’m always interested in a slightly different take on them. Hobb certainly delivers that.

Ultimately, though, no matter how interesting the concept, you also must have a good story, and that’s where the human characters come in. The twists, turns, secrets and deceptions do occasionally wander a little too far toward soap opera melodramatics, but in the end it all comes together to create a satisfying story.

“Dragon Haven” leaves as many questions about what will happen to the dragons and their keepers as it answers. I’d be interested to revisit at some point down the road and see how things turn out.