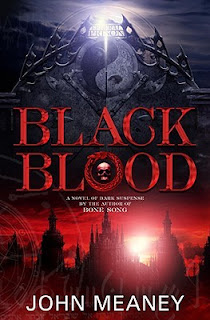 John Meaney returns to his intriguing world in "Black Blood" ($24, Spectra), the second in his series of books about police detective Donal Riordan.

As the book starts, Riordan has become a zombie. Not the classic, shambling, brain-eating zombie you’re probably thinking of, but a person resurrected by technological means. The big problem for Riordan and others considered nonhumans in Meaney’s world is a group called the Unity Party, which is pushing to strip their freedoms and possessions. The group is gaining power and influence daily, and also happens to have a number of ties to a group Riordan and his officers call the Black Circle -- a group directly responsible for the death of Riordan’s boss and lover Laura Steele, and his own.

Riordan’s life is in chaos. He has inherited all of the wealth of Laura, though that’s in jeopardy if the Unity Party has its way. His police unit has been put under the command of an outsider and the officers are being sent on secret missions to investigate mysterious white wolves appearing around the city and some new blue telephones which are being installed all over town with seemingly miraculous changes in the people who use them.

In "Black Blood" we get more glimpses of the fascinating world that Meaney has created -- part science fiction, part horror, part fantasy. Uncovering the strange workings of this world is one of the more entertaining parts of the story.

The civil rights thread that was an undercurrent in the first novel, "Bone Song," takes a much more prominent role and really pushes the action in this book. The efforts of the Unity Party bring a rapid change in the social structure in Tristopolis and makes Riordan’s job that much more difficult.

In the second book of the series, Meaney continues to set himself apart from the glut of supernatural detective stories out there. I’ll look forward to more visits to Tristopolis. 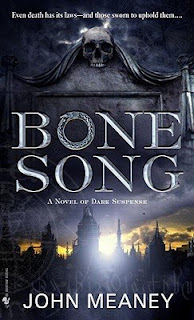 It’s a world where bones have great power. The energy to keep the city of Tristopolis running is generated from them, and the bones of artists have a seductive power all their own. Great performers are disappearing all over the world, with the attacks often happening in front of ensorcelled audiences. The bodies then mysteriously disappear.

Tristopolis detective Donal Riordan has been charged with protecting a famous opera diva who is visiting the city and suspected to be the next target. When things go awry, Riordan finds himself thrown into a new role as part of a special task force filled with interesting characters assigned to take down the suspected conspiracy behind the disappearances.

In "Bone Song," Meaney melds science fiction, fantasy, horror and police procedural to produce a book that brings something new and interesting to the overloaded supernatural detective story field. While there’s not a real weakness in the book, the true star is the world itself, powered by the necroflux created from human remains and filled with machines operated by often-enslaved wraiths. At times, it seems a bit like horror told with a hard science fiction style. There is, of course, an undercurrent here that often runs through these kinds of books about equality and rights for all beings, but it takes a back seat to the primary story.

The world isn’t the only attraction, though. Meaney builds a cast of interesting characters that seems to avoid many of the cliches of the genre.

Overall, "Bone Song" is a promising start to the series which continues with "Black Blood," already out in hardcover from Spectra. It will be interesting to see how things develop and if Meaney can keep it as compelling as the first installment.