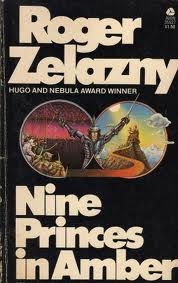 It’s been perhaps 20 years since I first read Roger Zelazny’s “Nine Princes in Amber,” but I recently felt the urge to revisit the tale that I remember fondly.

I always have some misgivings going into a re-read. What if the book doesn’t hold up to your memory of it? What if, 20 years and a lot of reading later, you’re just not that interested in it anymore? I’m pleased to say I didn’t have to worry about either of those things with this book.

The story begins with a man waking up in a hospital bed after a car accident and slowly coming to the conclusion that he’s being held against his will. He’s being heavily sedated, and when the nurse comes with the next shot, he refuses it. He fights his way into the office of the facility’s administrator and gains some vital information about the sister who is paying for his “care.” He heads to her home, where he begins a big bluff to try to figure out who he is and how he ended up in his current condition. 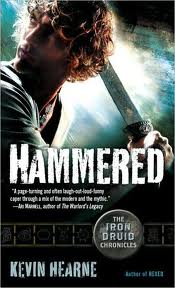 If you’ve read the first two books in Kevin Hearne’s Iron Druid Chronicles and are thinking to yourself, “Atticus O’Sullivan can’t keep getting away with all this thumbing his nose at deities. It’s got to catch up with him somewhere.” You’re right. It does in “Hammered” ($7.99, Del Rey).

In the first two books, Atticus has, to put it bluntly, pissed off quite a few powerful beings. In the third volume, the decisions and deals that he has made leave him in, as the Russian thunder god Perun so eloquently puts it, a “monstrous fuckpuddle.”

First he has to sneak in to Asgard, home of the Norse pantheon, to steal one of the golden apples of Idunn for the witch Laksha who has a new body and hopes to keep it young for a long time. It’s part of a deal he made with her when she took out a group of Bacchants who were looking to cause chaos in his area in “Hexed.” (Bacchus, the Roman god of the vine, is still pretty hacked off at him about that, too.) That mission turns into a complete disaster. 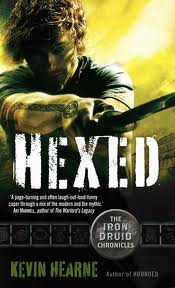 I enjoyed Kevin Hearne’s “Hounded” so much that I couldn’t help but dive straight into the sequel, “Hexed” ($7.99, Del Rey).

Killing a god will draw some unwanted attention, as Atticus O’Sullivan, last of the true druids, is quickly learning. It especially complicates things when half of the local coven of witches who are keeping out other undesirables is killed in the process.

Atticus finds himself in the uncomfortable position of having to draw up a peace treaty with the remainder of the coven, something he’s not happy about given his general distrust of witches. But he has to ally himself with them if he wants to withstand the other threats that are moving into his town. There’s a coven of German witches quietly setting up for some bad mojo, and a group of Bacchants, followers of the Roman god Bacchus, who are not so quietly about to cause some chaos. All the while, he can’t stop people from asking him to take out other gods, particularly Thor, Norse god of thunder, who is pretty unanimously considered a prick throughout the supernatural community. 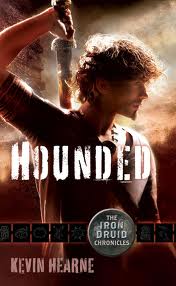 Just when I think I’ve had about all the urban fantasy that I can handle, along comes something like Kevin Hearne’s “Hounded” ($7.99, Del Rey).

I picked up the book on the suggestion of a friend and fellow Jim Butcher fan, who described it as “Butcher-lite.” I’d say that’s a pretty fair description, and of all the “if you like Jim Butcher, you should try this” recommendations I’ve checked out over the years, “Hounded” is far and away the best of them.

Atticus O’Sullivan – or Siodhachan O’Suileabhain, as he’s known to those more than a few hundred years old – is a druid. Though most people would mistake him for a 21-year-old college student at Arizona State, he’s actually closer to 2,000 years old. He’s the last of the true druids, and he has some pretty interesting friends, including the Celtic goddess the Morrigan and a vampire and werewolf as his legal co-counsels. He runs a new age book and herb store in town, hunts with his Irish wolfhound Oberon and tries to keep a low profile with the fae and supernatural types, which is made easier by the Arizona terrain.

Review: "Beyond the Shadows" by Brent Weeks 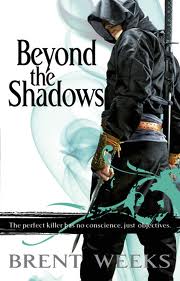 I honestly can’t say why it took me so long to get to “Beyond the Shadows” ($7.99, Orbit), the final book in Brent Weeks’ Night Angel Trilogy. I loved the first volume and really liked the second, but for some reason I spaced them out about a year or so apart.

As we begin the third book, Kylar Stern has made the transition from a brutally effective wetboy to the Night Angel, a being with the ability to see sins and mete out justice, after a fashion, of course. That doesn’t mean he’s happy about it, though. Logan Gyre, rightful king of Cenaria, is still serving under Terah Graesin, a queen that serves only herself. After emerging from the brief, but brutal reign of Godking Garoth Ursuul, Cenaria is threatened by two new armies.
Read more »
Posted by Fred Phillips at 6:04 PM No comments:
Labels: Assassins, Book reviews, Brent Weeks, Fantasy, Magic, Night Angel 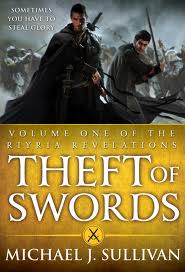 “Theft of Swords” ($14.99, Orbit) collects the first two of Michael J. Sullivan’s Riyria Revelations series. Five of the six books, which were written for Sullivan’s dyslexic daughter and his own enjoyment, were published through independent and small presses before being picked up by Orbit, which released the books as a trilogy featuring two each.

In “The Crown Conspiracy,” the first of the two books collected in “Theft of Swords,” we meet our heroes, a pair of dashing and likeable rogues by the names of Royce Melborn and Hadrian Blackwater. We meet them in a most interesting scene that immediately lets the reader in on the kind of heroes they are. Highwaymen attempt to hold them up and, of course, fail, but the two thieves, who call themselves the Riyria, leave their would-be attackers a bit red-faced with some tips about how to do it better next time. It’s a great scene that instantly endears the reader to the duo.
Read more »
Posted by Fred Phillips at 8:50 PM No comments:
Labels: Assassins, Book reviews, Dragons, Fantasy, Magic, Michael J. Sullivan, Riyria Revelations, Thieves
Newer Posts Older Posts Home
Subscribe to: Posts (Atom)