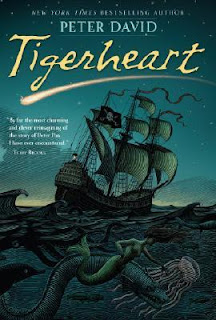 Peter David, known for his off-kilter take on King Arthur, turns his attention to another popular literary character in "Tigerheart" (Del Rey, $22.)

The star of the tale is a young boy named Paul Dear who is on a quest to please his mother and rebuild his family after the death of his infant sister. Paul has been raised on tales of the Anyplace and its enigmatic hero The Boy by his father. Though you may not recognize the names, the characters will be very familiar to anyone who knows the works of J.M. Barrie or the many adaptations of those works.

So, why not just use Neverland and Peter Pan? According to David, Peter Pan is far too self-centered to allow anyone else to be the star of a book that includes him, and Paul is most certainly the hero in this tale.

Having learned early on that he can speak to animals and being fueled by his father's stories, Paul has glimpsed the Anyplace often. He's also befriended a snow tiger that prowls the imaginary land. After his infant sister's death, Paul's life changes. His mother and father split up, and his mother forbids any talk of the Anyplace or the Boy, even going so far as to have Paul put on prescriptions to keep him from speaking of it. Eventually Paul begins to trick his mother by not taking the pills, and that's when he formulates the plan to follow the pixie Fiddlefix (who has her own reasons for wanting Paul to come) into the Anyplace to find a new little sister and make his mother happy again.

Once there, though, he finds a place that's a little different than what he expects. The Boy, having defeated Captain Hack, has comandeered his pirate ship and, along with Hack's sister, Captain Slash, is terrorizing the Anyplace. It's up to Paul to find out why the Boy has changed and win his help to solve the problem.

David's tale is an interestingly different look at the legend of Peter Pan. Much like the original, it's often fascinating and often quite dark. While it does celebrate the imagination of childhood, David's work also takes a look at the bleaker, less pleasant side of the Boy's refusal to grow up and gives him a crisis of conscience that we could probably never imagine Peter Pan having.

One problem the book does have is in the narrative style. David often breaks the story to address the reader directly. I understand that it's an attempt to recreate Barrie's style and create the feeling of a storyteller spinning the tale. More often than not, though, it took me right out of the flow of the story.

That aside, "Tigerheart" is an imaginative and fun take on a familiar place and characters. It provides a slightly different spin on the classic tale and some food for thought. 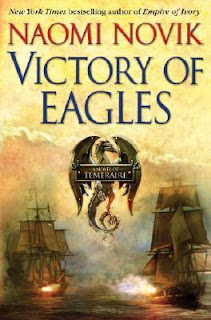 Naomi Novik picks up where she left readers hanging with the last installment in her fantastic reimagining of the Napoleonic Wars in "Victory of Eagles."

A short time has passed since the final scene of "Empire of Ivory," when the dragon Temeraire and his captain Laurence were being taken into custody by British officials for providing Napoleon with a cure for the deadly disease that they hoped would devastate the French dragon corps. Laurence has been convicted of treason, but is being kept alive to make sure Temeraire remains cooperative. Temeraire, the rarest of dragons, has been sent to the breeding grounds where they hope he will pass on his Celestial genes, particularly his devastating weapon, the Divine Wind. Needless to say, he is not very happy with the development.

When rumor reaches Temeraire that Laurence has been killed in a French attack on the ship that was trans-porting him, he mobilizes the other dragons of the breeding grounds into an army of uncaptained dragons with the goal of vengeance on the French.

One of the strengths of the series to this point has been Novik's ability to make the tales believable. She writes of the dragons with the same flair and spirit that Patrick O'Brian writes his naval adventures. But here, she begins to stretch the bounds of credulity. Surprisingly, that stretch has nothing to do with the dragons that are flying around. Rather, it gets harder and harder for the reader to understand Laurence's tortured sense of duty.

It's obvious no one wants him around. He has a dragon that's itching to fly away. They can return to Temeraire's homeland of China and live like royalty, or go anywhere else in the world for that matter. Of course, I suppose flying off and living happily ever after wouldn't make for a very good adventure.

There's also the matter of the social issues that Novik has injected into the story. While the dragons' fight to be recognized as thinking beings rather than dumb beasts takes a great leap in this book, it feels a bit rushed with the formerly obstinate officials in power agreeing far more easily than it seems they would. While these things don't ruin the book, they do invade a bit on the suspension of disbelief that's required to enjoy it.

That said, "Victory of Eagles" is still an engaging book, and the personalities, particularly of the dragons, are still the main attraction. At the same time, it doesn't capture my imagination in the way that the earlier books in the series did. Here's hoping for a little less of the tortured sinner from Laurence and a little more adventure in the next one.

On a side note, Peter Jackson has optioned the first four books in the series. Should a movie ever develop, it should make a stunning subject for Jackson's treatment.