Review: "The Name of the Wind," by Patrick Rothfuss 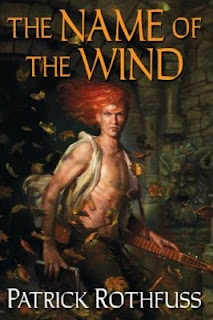 Normally I hate it when a writer starts one story then morphs into something else, but I really can’t hold that against Patrick Rothfuss in his excellent debut novel "The Name of the Wind" ($24.95, DAW).

It starts with the tale of an innkeeper with a secret past and some strange spider-like creatures who are attacking people on the road around the village. When a scribe comes to town and discovers the innkeeper’s secret, it changes to the life story of the innkeeper, who is actually the hero (and villain) Kvothe. In the end, the reader is left without any real resolution and with very little knowledge of what was going on at the beginning of the book. The spider-like creatures remain almost as much a mystery as they are when a guy walks into the bar with a dead one. As frustrating as that might sound to some, it’s really not at all.

The reason is that Kvothe’s story is fascinating. We follow him from his childhood with the traveling Edema Ruh and the tragedy he faced there, to his time on the streets in the city of Tarbean, to his quest for magic and the name of the wind at University. Along the way, it mixes elements of a lot of different stories.

Overall, the character of Kvothe reminds me a little of David Gemmell’s Druss the Legend. I can’t quite put my finger on why, but there’s just something about the feel of the story that gives me that same vibe. Maybe it’s the quiet, stoic heroism — though, I believe we’ll discover that hasn’t always been Kvothe’s way. Certainly, there’s the feel of a very dark and dismal "Oliver Twist" during Kvothe’s time on the streets, and much of the character’s experiences at the University will remind readers of the Harry Potter stories, though with a much more adult tone.

That said, "The Name of the Wind" doesn’t seek to emulate any of those stories. Despite perhaps reminding readers of those and more, Rothfuss’ debut stands on its own as a fascinating story about a fascinating character. The book creates a lot of questions in the reader’s mind, but answers few of them, instead hinting that all will be revealed as Kvothe’s story continues. There’s also something about Rothfuss’ style that seems to reassure the reader that patience will be rewarded and all will be revealed.

"The Name of the Wind" is a very well-crafted story with complex and likeable characters, and to me, that’s really what you look for in a fantasy novel. I highly recommend it.

Get "The Name of the Wind."
Posted by Fred Phillips at 2:25 PM No comments:
Labels: Book reviews, Fantasy, Magic, Patrick Rothfuss

Armchair QB: Two in a row

So I'm a little late on this one. I was out of town for the Seahawks game and watched it late, then was playing catchup at work, dealing with elections and fall's my busiest season of the year. I'm behind on lots of stuff. It happens.

At any rate, you've got to be pleased to finally get in the W column and almost ecstatic to win two in a row at this point. I've been preaching patience in the Saints circles that I run in. It seems after the 0-4 start a lot of the folks around me had forgotten that Sean Payton led this team to its best season ever just last year. They were calling for wholesale changes to the team. Some were reasonable -- a new kicker. Some were ludicrous -- trying to get Ricky Williams back if he's reinstated. No thanks.

I've got a theory, though, and that is that teams who have success quickly and unexpectedly like the Saints did last season aren't really prepared to deal with all that comes with it. Certainly, we were overhyped coming into the season, and fan expectations, including my own, were running way too high. Then there's the fact that never in the history of the team have faces from the Saints been as prevalent as Reggie Bush and Drew Brees are right now. I mean, you see one, if not both of them, during every commercial break during every game. That has to be a bit of a distraction if you're not used to dealing with it. I think the team is just finally settling down and getting back to business. Better late than never.

That's not to say that everything is fixed. They gave us a good scare at the end of the Seattle game, and barely survived against an awful Atlanta team -- though certainly you have to note that's a rivalry game, too. Then there's the fact that we punted from the 35 because we don't trust our kicker to send him out for a 52 yarder. I'm still not sure that we did the right thing by not signing one of the kickers we tried out, but for now I'll trust that Payton knows what he's doing. He served us well last season.

Still, looking down our schedule, it doesn't look too bad. Niners, Jags, Rams, Texans, Panthers, Bucs, Falcons, Cardinals, Eagles and Bears. There are definitely some tough games there, but with the Eagles and Bears struggling, it certainly doesn't look as vicious as it did at the start of the season.

Certainly the Saints have got a tough mountain to climb. They'd have to finish 8-2 to match last season's total, 7-3 to salvage a winning season. I haven't given up hope yet, though. They'll definitely have to play better than they have even in their two wins, but I think a 9-7 finish and sneaking into the playoffs as a Wild Card team is not out of the question at this point. It's not the Super Bowl that we hoped for before the season began, but I think most of us would be happy with it.
Posted by Fred Phillips at 12:32 AM No comments:
Labels: Saints

Feels like old times, snatching defeat from the jaws of victory.