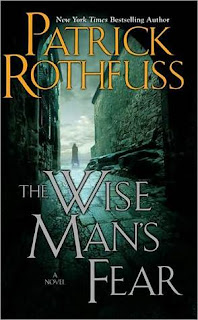 Patrick Rothfuss’ debut novel, “The Name of the Wind,” was one of the better fantasy discoveries I’ve made in recent years. Four years later, he finally delivers the sequel, “The Wise Man’s Fear” ($29.95, DAW). Like many sequels, it’s somewhat lacking.

The book continues the tale of the hero (or villain, depending on your point of view, I guess) Kvothe. Now retired from the hero life and running a tavern in a small village, Kvothe’s secret has been found out by a scribe called only the Chronicler. He has convinced the former hero to share his story and this book represents the second part of it.

A whole lot of things happen in this book. Kvothe leaves the University for a time, finds a patron (in a manner of speaking), spends some time in faerie and trains with a fierce warrior race. While all of these things develop the character of Kvothe in their own way, very few of them develop the story. Where “The Name of the Wind” felt very calculated and well-planned, in “The Wise Man’s Fear,” Rothfuss seems to be flying by the seat of his pants a little.