Review: "Planet of the Apes" by Pierre Boulle 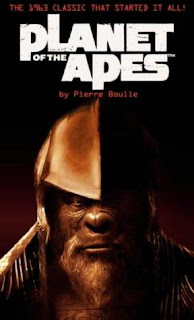 It's a rare thing for me to see the movie before I've read the book, but I was taken by surprise recently. I remember seeing "Planet of the Apes" when I was younger, as well as its sequels and even the television show it spawned. But I was completely unaware that it was all based on a book.

First published in 1965, Pierre Boulle's "Planet of the Apes" has recently been re-released by Del Rey in time for the big-budget remake of the movie. The version is translated from French by Xan Fielding.

It's an unusual situation for me. My entire perception of "Planet of the Apes" comes from the movie, which I consider one of the classics of science fiction. So I approached the book with the same trepidation usually reserved for movie adaptations.

What I discovered was a similar, yet deeper story than the one on the screen. Whereas the movie relies more on the action and the conflict, Boulle's book is more contemplative. The novel is a more cynical and satiric tale of role reversal.

The story is basically the same. A group of adventurers set out to explore deep space and encounter a planet very similar to Earth. On the planet, which they name Soror, they run into a strange tribe of humans who live in the forest and speak in primitive noises. When their launch is destroyed by the natives, they're stuck on the planet, and they soon discover a darker secret.

They believe that some trick of evolution has caused this world to take another fork - and it's apes, rather than humans, that rule the world. But that's not the real story. As journalist Ulysse Merou and a couple of his captors explore a ruin, they discover a secret that makes the human who talks a threat to the entire society of the planet.

Unlike the film, the book isn't a post-apocalyptic vision of the future. Instead, it's more of a cautionary tale about the human race's propensity for laziness - a theme we've seen time and again in the intervening years in science fiction books and movies where machines rule the world.

I did question the space travel aspect of the novel, which seems a little shaky. But then, the book was written in the early 1960s when space exploration was in its infancy.

The changed ending is a point of contention among fans for the remake, but the ending of the original movie was a deviation from the book. I won't spoil it, but Boulle's surprise is just as effective.

Review: "The Mists of Avalon" by Marion Zimmer Bradley 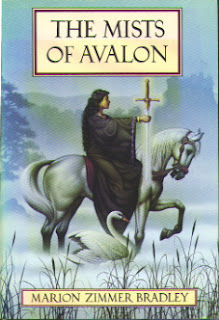 There have been hundreds of books written about the Arthurian legends, and for every good one, there are at least three or four bad ones.

I've read a lot of Arthurian fantasy, but there are only a couple that stick out in my mind as "must-reads." They include Sir Thomas Malory's "Le Morte D'Arthur," T.H. White's "The Once and Future King" and last, but certainly not least, Marion Zimmer Bradley's "The Mists of Avalon." Each of these books brings something different to the round table, "Mists of Avalon" most of all.

To coincide with the TNT miniseries, Del Rey has issued a Ballantine Reader's Circle edition of Bradley's classic, and it seemed like a good opportunity for me to revisit a book I hadn't read in a few years.

You've heard the stories about Arthur and his knights, but Morgaine - later known as Morgan Le Fay - is quick to tell you that most of them have, at the least, been exaggerated. Many are outright lies.

"Mists of Avalon" is unique in that it's told exclusively from the point of view of the major women in the legends - The Lady of the Lake Viviane, Arthur's mother Igraine, Arthur's aunt Morgause, Queen Gwenhwyfar and, of course, the key player Morgaine.

While the story follows the basic outline of most Arthurian legends, it takes a lot of detours from the worn path. Many things we take for granted in the legends, we find to have very different reasons for happening in Bradley's vision.

If history is viewed through the eyes of the victor, "Mists of Avalon" is the lost text written by the other side.

The reader will leave Bradley's book with a new understanding of Morgaine, a character so often viewed as an evil villain. In reality, she's more a victim of the changing times.

She's not the only one who gets a facelift, though. Bradley does an outstanding job of developing all the characters and revealing some surprising things about them. She takes already rich subject matter and makes it even more intriguing.

The book also tackles some tougher issues - including religion and gender roles.

Central to the story is the struggle between age-old pagan religions and the new Christianity, which is rapidly sweeping over the world. The tension between the earth-based religion of the Druids and the more rigid rules of the Christian church create a majority of the conflict in the tale.

Arthur is sworn to the Priestesses of Avalon to be a fair ruler to both the followers of the old ways and the Christian church, but Gwenhwyfar would have the old religions driven from her country. The struggle ultimately leads to his downfall.

Stemming from that same conflict is another involving the changing role of women. Before the rise of Christianity, women have been respected advisors, but the new church thinks it an affront for a woman to raise her voice, a problem that puts Morgaine constantly at odds with her brother's wife.

As for the TNT miniseries, it has the same problems that most Hollywood productions have - an attempt to cram an 800-page novel into four hours of film, with commercials. The filmmakers cut deeply and twist certain events for dramatic effect.

While I'll admit that Bradley's novel could have been trimmed a little, the film cuts far too much. Much of the conflict between the Christian and pagan religions - which is so key to the success of the book - is lost. Many of the excised scenes are also ones that are very telling about the characters. The result is instead of the rich personalities of Bradley's work, you have undeveloped cut-outs of many of the characters.

Despite its liberties, however, the film does follow the same basic plan as the book. It's also saved by impressive performances from Julianna Margulies, Joan Allen and Anjelica Huston. The actors chosen to portray the Merlin and Mordred, were also, in my estimation, perfect for the parts.

While the movie is entertaining, as with most things, it doesn't even come close to the power of the book. Enjoy the movie, then go out and buy the book. It's long and involved, but well worth the effort.