Every time I have to sit through commercials while watching televison, I'm exceptionally thankful that I have a DVR at home so I can fast forward through them. Maybe I'm not the target for those genius ad executives, but most of the commercials I see just annoy the hell out of me. They actually drive me away from the products they're trying to sell.

A perfect example of this is the guy from Subway. When he started coming on TV telling us how he lost all this weight eating at Subway, I said "hooray for him, now pass me that Quarter Pounder." It didn't convince me to eat at Subway, but it didn't annoy me either. Now, the genius ad execs have given Jared a new mission in life, to put down every other restaurant's food. Now, he comes on with a smirk telling us how much fat is in this or that and how superior Subway's food is to those other guys. Sorry, but I've eaten at Subway. I wouldn't say it's any worse than McDonald's or Burger King, but I wouldn't say it's any better either. I've always believed that when you had to attack the competition, it's probably because whatever you're trying to sell can't stand on its own.

And besides, who the hell is this guy to look down on me because I choose to have a double cheeseburger instead of a sweet teriyaki chicken sandwich? It's not even like the sandwich they show on TV is the one with only five grams of fat, either. That's the one on wheat bread with no condiments whatsoever.

It struck me as funny the other day when I drove by a local Subway and saw on the sign that they're now offering pizza. Here's this guy on TV telling me that Subway is so much more healthy than anywhere else, and now they're serving pizza. I'm sure those pizzas only have five grams of fat, right?

But in all fairness, it's not just Jared. He's just been the most annoying of late. A while back there were those Truth "anti-smoking" ads. I put that in quotation marks because I came away from most of those commercials actually feeling better about the tobacco industry -- and that's sad. Then again, they were sponsored by a tobacco company, so maybe that's what they were designed to do. They always had a bunch of snotty, annoying kids pulling some kind of publicity stunt. One that sticks out in my mind had these kids sneaking through a hotel in the middle of the night, putting signs on the door knobs. My reaction to that was, "If you're so proud of what you're doing, why don't you march your punk ass in there during the day and do it?" Of course, then they might meet some of these people they're villainizing, and it would be most inconvenient to actually have someone express a differing viewpoint, wouldn't it?

But some of the most mind-boggling commercials to me are the ones that the police put on TV. Locally, we have these seat belt commercials from the state police with this macho-sounding voiceover (and you'd really have to hear it to understand just how bullying and condescending it is) saying "IF YOU DON'T WEAR YOUR SEAT BELT, YOU WILL GET A TICKET." Yeah, threats always get the desired response out of your audience. Being the personal freedom advocate that I am, I'm not the biggest fan of seat belt laws to begin with, but every time I see one of these commercials, it makes me want to get a knife and cut the seat belt out of my truck. Do they honestly think they're convincing people to wear their seat belt by threatening them? My guess is they're actually galvanizing people who don't wear their seat belt against the laws.

If you can't sell me your products on their own merit or convince me why I should do something without threats, then obviously what you're selling isn't worth buying. And even if it is, you're still not selling it to me. Maybe one day advertisers will come around and realize that the best way to get your point across is not by annoying or bullying people. Until then, my finger's on the fast forward button.
Posted by Fred Phillips at 1:24 AM No comments:
Labels: Random rants

Review: "Harry Potter and the Half-Blood Prince" by J.K. Rowling 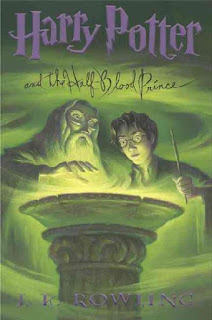 As Harry grows up, so does J.K. Rowling's writing style, and that's as it should be.

With "Harry Potter and the Half-Blood Prince" ($29.99, Scholastic), Rowling delivers a fairly grown-up tale of the now 16-year-old boy wizard. Though not quite as dark and menacing as the previous volume, "Order of the Phoenix," this book deals with much more mature issues than the earlier volumes of the series. That, too, is proper, considering how much people change between the age of 11 and 16.

"Half-Blood Prince" opens in a world that's eerily similar to our own over the past several years. Lord Voldemort is back, the Death Eaters are reformed and the wizarding community lives in fear of their attacks. Wizards are being killed or simply disappearing almost daily. Harry, Hermione and Ron often start their morning reading the Daily Prophet with Ron asking if anyone they know has died today. It's very much like the on-edge feeling following terrorist attacks in the real world.

Even in the midst of this, life must go on, so Hogwarts reopens with a surprising new professor in the Defense Against the Dark Arts classroom, and the young wizards put their noses back in the books. One book, in particular, formerly owned by someone calling himself the Half-Blood Prince, is helping Harry to excel in potions and learn a variety of new spells that aren't taught in the classroom.

Harry has also begun private lessons with Professor Dumbledore, designed to help him better understand the enemy, and he's obsessed with finding out what his old rival Draco Malfoy is up to.

While parents have been cautioned to read this book first - and it's not a bad idea for younger kids - I didn't find it too graphic. There are some intense action sequences and a very emotional ending that, as has been widely reported, includes the death of a major character, so it may be good to discuss some of the issues along with kids.

"Half-Blood Prince" works to flesh out a lot of the deep background of the story and set up the final volume that's to come. We learn much more about the history of Lord Voldemort and the Death Eaters. We're also hit with a few surprises along the way - one being the true identity of the title character.

There are also some allusions to other literary works. Whether intentional or not, I was reminded greatly of Charles Dickens' "A Christmas Carol" as Dumbledore and Harry take trips into the past through the Pensieve. I was also reminded of scenes from Tolkien as the two cross an underground lake to retrieve a magical artifact.

The only real problem I can find with the book was that it ended. While the earlier books in the series have been pretty self-contained, this one feels more like the first part of a two-part story. While it doesn't exactly end in a cliffhanger, it does end in a place that leaves the reader with many more questions. It creates even more anticipation for the grand finale.