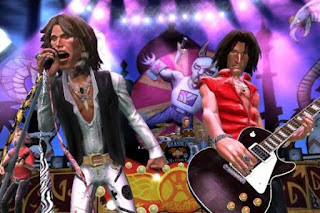 To hold fans of the “Guitar Hero” series over until the fourth installment arrives this fall, Activision delivers what could be the first in a series of artist-based titles, “Guitar Hero: Aerosmith.” (Rumor has it that “Guitar Hero: Metallica” is already in the works for a 2009 release).

While it’s still more of an expansion pack for “Guitar Hero III” than a new game, “Guitar Hero: Aerosmith” does manage to bring a few new twists to the table, unlike last years “Guitar Hero Rocks the ’80s.” While the game follows the basic pattern and rules of “GH III,” in career mode players must first perform two songs as an opening band before they unlock Aerosmith for that level and get to rock out on the band’s classic tunes.

The opening band numbers include classic songs from bands like Cheap Trick, Ted Nugent, Joan Jett, The Clash, Run DMC and more, all hand-picked by the members of Aerosmith. Most of them are the actual songs, rather than the covers that have dominated past installments of the game (though there are still four or five of those.) Once you get past those, there are two Aerosmith tunes and an encore to unlock a video of the band discussing its career and move to the next level.

The venues here are integral to Aerosmith’s history from the high school where they played their first gig, to Max’s Kansas City where they were discovered to the Orpheum Theatre where they reunited in the early 1980s to the Rock ‘n’ Roll Hall of Fame and halftime of “the big game.”

Perhaps the best part of this game is the playlist in career mode. Notably absent are overrated and oversaturated tunes like “I Don’t Want to Miss a Thing,” “Janie’s Got a Gun,” “Dude (Looks Like a Lady)” and the “CryinAmazaCrazy” trilogy. Instead, we get some underappreciated gems from the catalogue, like “Movin’ Out,” “No Surprize,” “Uncle Salty,” “Nobody’s Fault” (my personal Aerosmith fave) and the Joe Perry vocal on “Bright Light Fright.” I was disappointed in the decision to use the Run DMC version of “Walk This Way,” but the real version is included as an unlockable extra and that’s a minor quibble for a set list that’s heavy on hard-rocking classics and light on the newer hits.

All in all “Guitar Hero: Aerosmith” is a short, but enjoyable add-on that should whet your appetite for “Guitar Hero World Tour,” due out just in time for Christmas, of course. More of these artist-based titles would be welcome. 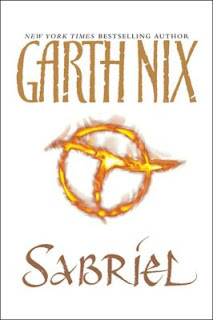 I’m a latecomer to Garth Nix’s Abhorsen Trilogy, having only picked up the series with the latest trade paperback re-release of the first book, “Sabriel” ($9.99, Eos). So far, I’m impressed and sorry that I didn’t pick it up years ago.

The title character is a young girl, just coming of age, at a school in Ancelstierre, a more modern world where technology rules. But she’s from the Old Kingdom, separated from Ancelstierre by a wall, where magic is king. Her father is a necromancer, but not the bad-guy kind that raises the dead. Instead, it’s his mission to banish the dead from the world of the living, and there are plenty of dead for him to stay in business since chaos has descended on the Old Kingdom with the end of the royal line and the breaking of the magical Charter stones.

One day at school, Sabriel receives a strange messenger from the realms of death, one who brings her father’s magical sword and the bells he uses to banish the dead. Though ill-prepared, Sabriel has to take up the title of Abhorsen and do battle against an enemy named Kerrigor that’s returned from death and is about to take his revenge on the Old Kingdom and Ancelstierre alike.

Though the basic storyline here — a young person thrust into a destiny that he/she is unprepared for and must rise to the occasion — is one of the oldest in fantasy, and perhaps in literature as a whole, Nix breathes new life into it with an imaginitive reality and cast of characters. While the story here is self-contained, with no loose ends left, it still seems to be only a beginning. The book, which focuses primarily on the characters, leaves the readers with a great many questions about the wider world, a combination of a more traditional fantasy world blended with a World War II-era world.

The book features a darker tone that reminds me a bit of Michael Moorcock’s Elric tales, yet the action is fast and lively and less brooding than those books. Aimed at YA readers, the book could use a little fleshing out with a bit more depth and time given to the characters and the world amid the action sequences, but that won’t keep you from falling into the fast and furious flow of the book and enjoying it just the same. I look forward to what comes in the next two volumes, also recently re-released by Eos. 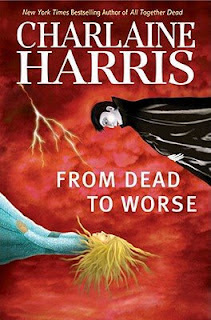 There’s an air of finality in “From Dead to Worse” ($24.95, Ace), the latest volume of Charlaine Harris’ tales of telepath Sookie Stackhouse.

As the book starts, Sookie is trying to get her life back to normal after she was caught in the middle of an anti-vampire terrorist attack in the last volume. She’s returned to her waitressing job in Bon Temps, just up the road from Monroe, but the peaceful life, as usual, evades her. Soon after the book opens, a war between erupts between rival factions of the Shreveport werewolf packs, and on top of that, a crew of vampires from Las Vegas is in town eyeing a takeover with Louisiana queen Sophie Anne-Leclerq weakened by Hurricane Katrina and injured in the terrorist attack.

Sookie’s personal life continues to be tumultuos as her weretiger boyfriend Quinn has gone missing, her witch roommate has problems with a rich father and a former mentor who has found her and she gets caught up in her brother’s marital problems.

While it may sound like the plot of a really bad soap opera, Harris always manages to handle things deftly to keep the reader engaged and keep the story from devolving into silliness, no matter how many supernatural characters show up or how many unlikely events break out.

For folks like me, who have lived in this area for most of my life, it’s a bit hard to imagine having vampires and werewolves lurking around every corner, but Harris has a way of making the reader buy it hook, line and sinker.

This book has the feeling of a wrap-up with most of the ongoing storylines from the previous books seemingly tied up at the end. A sense of normalcy is returned to Sookie’s life. The good news for fans is that there are a few new problems and there’s an intriguing twist at the end of the book that seems to promise more stories to come. At the very least, fans can check in with Sookie again this fall when HBO launches the series “True Blood,” based on the books.