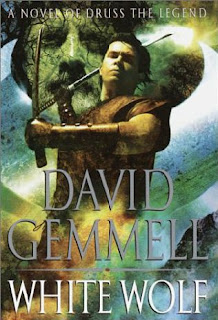 One thing I've always loved about David Gemmell is that he doesn't rest his career on the strength of one character.

While some fantasy writers create a hero that fans love and ride him into the ground, Gemmell rarely spends much time with each character, instead preferring to look at the big picture of his worlds.

He was even able to tell the tale of one of his most fascinating characters - the Jerusalem Man, Jon Shannow - in three books.

That said, there's one character that Gemmell can't resist returning to, a fan favorite - the axman, Druss the Legend. He goes to the well once again in "White Wolf" ($24.95, Del Rey), and there's still plenty of water to be found.

True to form, though, the novel is less about Druss, and more about the people around him. The Legend doesn't even appear until the book is almost a quarter of the way over. Instead, we're introduced to Skilgannon the Damned, a famed and vicious Naashanite warrior who, regretting some of the horrific acts he was commanded to perform, has fled his homeland and sought refuge in a monastery.

Then, there's Rabalyn, a young boy from the village near the monastery, who is known as a bit of a ne'er-do-well, but has taken a liking for a teacher from the monastery.

Things go badly for both of them when hard times begin to impact the town and sentiment turns against the priests.

When one of the brothers is attacked, Rabalyn defends him from the town bully, who also happens to be the son of the town's mayor. Angered that he has been thwarted by Rabalyn, the bully sets fire to the boy's home, killing his grandmother. In his rage Rabalyn exacts his revenge in front of the entire town, including the boy's father.

Seizing the opportunity to resolve a debt the city owes the church, the mayor claims the boy is being sheltered there and leads a mob of townspeople to get him. When they attack, Skilgannon's true nature comes out, and while he saves the priests from destruction, he finds himself cast out.

As Skilgannon and Rabalyn set out to find their futures, a chance meeting with Druss changes the course of their lives - and possibly the future of the lands of Drenai as well.

Give Gemmell a tortured and haunted hero, and he's in his element. All of his most fascinating creations - Shannow, Druss and now Skilgannon - share that characteristic, and he handles the brooding, troubled type well.

At the same time, Gemmell's heroes are much more accessible than most. They're a down-to-earth sort.

I can easily imagine sitting around having a beer and trading stories with Druss (I imagine him as a larger, quite congenial version of Sean Connery.) In fact, the picture of Druss is so strong, you can almost hear his voice as you read the words on the page.

Gemmell is one of the best fantasy writers going these days, and I'm glad to see that his work is catching on with the American audience. Here's to many more great tales to come.

Review: "Sound of the Beast" by Ian Christe 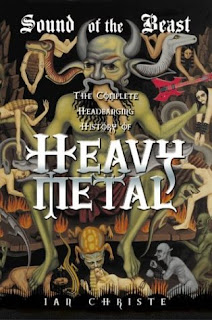 "Sound of the Beast: The Complete Headbanging History of Heavy Metal" by Ian Christe ($24.95, HarperCollins) chronicles the rise of heavy metal from Black Sabbath through the nu metal movement of today.

While the book may draw the criticism of some who would argue that Led Zeppelin and Jimi Hendrix were the originators of metal, once it gets past that, there are few who will argue with the rest.

Plenty has been written about Zeppelin and Hendrix, and I'd venture to say there are few metal fans that aren't familiar with those artists and the profound effect they had on the music that would become heavy metal.

But being firmly entrenched in the Black Sabbath camp, I can find very few faults with Christe's account of the music I love.

The book begins with the Sabbath story and traces the music through the New Wave of British Heavy Metal in the late 1970s and early 1980s.

From there, Christe picks up the story of Metallica. At first, I was a little disappointed in his treatment beyond that. He spends a great deal of time on the rise of the Bay Area Thrashers - even more than on Sabbath.

On second thought, though, I had to admit that few bands have had a greater impact on the music than Metallica.

Christe offers nods to all of the other influential bands, though he doesn't spend as much time with them.

He also drags out some obscure bands that made a contribution - even a couple that I wasn't familiar with.

If the book has one fault, it is that Christe is a fan - and obviously so. If you're looking for an objective portrait of the music, look elsewhere.

He wears his likes and dislikes on his sleeve, and it's easy to tell who his favorite bands are.

At the same time, it's Christe's passion for heavy metal that really makes the book sing - or, in this case I suppose, scream.

I'd much rather read a stirring account like this from a fan that I occasionally disagree with than a rote recitation of the lineage of metal from some music historian who could care less.

Christe also incorporates lists of essential recordings at various points in the book. I disagree with a lot of them, particularly the overall list, but that's part of the beauty of those kinds of lists.

They get fans talking, opening up a dialogue that may lead people to something they've never heard before.

As a fan, it seems foolhardy to me to attempt to sum up the entire heavy metal experience in less than 400 pages. It just can't be done. But with "Sound of the Beast," Christe has done it as well as I think is really possible.

I'll admit it. I'm a sucker for a Schwarzenegger action flick. I have been ever since I saw his portrayal of Conan the Barbarian in the early 1980s.

Whether Ah-nuld's swinging a sword at a giant snake that used to be James Earl Jones, tracking down the baddies who kidnapped his daughter or unloading a machine gun on an invisible alien, I've probably seen them all and enjoyed quite a few of them them in a mindless sort of way. (His attempts at comedy are another story altogether.)

That being said, I was still a little leery of a James Cameron-less Terminator movie. But relatively unknown director Jonathan Mostow has done a good job with the third installment.

Ah-nuld is back as the character that turned him into a major action star, and he's been sent through time once again to save John Connor (Nick Stahl) from a new Terminator model that's here to kill him. Sound familiar? If you've seen 1991's "T2: Judgment Day," it should. Still, it's deftly handled, and there's also a nice twist at the end that I won't give away here.

John Connor is now an adult. Judgment Day has been averted thanks to the efforts of Ah-nuld, John and Sarah Connor in "T2," but John's still not convinced that the battle is over. He has no ties to anything that can mark him. He's invisible. Of course, that doesn't stop the new T-X, played to the hilt by Kristanna Loken, from tracking him down. The T-X is actually after his future wife and first lieutenant in the coming war, Kate Brewster (Claire Danes), but she stumbles onto both of them after Kate catches John breaking into the veterinary clinic where she works.

As usual, Ah-nuld arrives right on schedule to whisk the pair out of danger. They then lead the T-X on a merry chase to find Brewster's father - who is in charge of the revamped Skynet program which will bring about Judgment Day - and keep him from sending the system online to fight a virus that seems to be taking over all the computer systems in the world.

As with most action movies, you have to leave logic and reason at the door when you go into the theater. You can't wonder about how the T-X gets buried in the rubble of a wall early in the movie and emerges not only unscathed but without even getting her clothes dirty, but then later in the movie gets buried and emerges without skin or legs. If you stop to consider things like how Kate, John and Ah-nuld get into a top secret government building without being noticed, you'll drive yourself crazy. If you forget about it, shovel some more popcorn into your mouth and enjoy the ride, it's a great summertime movie.

That's another way this movie reflects "T2." It's pure special effects and action fun. While the original "Terminator" was a dark, brooding movie. This one's an excuse for chases, explosions, cool effects and rapid-fire one-liners from Ah-nuld. In fact, I'd venture to say that at least half the fun of a "Terminator" movie is seeing Schwarzenegger deadpan lines as a robot, erm, I mean cybernetic organism. Think of how many have entered the pop culture lexicon - "Hasta la vista, baby," "I'll be back."

You expect the special effects to be great in "T3," and for the most part, they're impressive. Perhaps not as groundbreaking as "T2," but certainly more polished due to advancements in the technology. The T-X character is also an interesting development. The robot skeleton gets a new look and this time, it's covered with a morphing metal that allows it to change into anything it touches. Then there's the handy dandy arm attachment that turns into whatever tool or weapon it needs.

Loken does a remarkable imitation of Schwarzenegger's original character as she stalks across the screen showing no trace of emotion or humanity. It's also kind of fun to watch a 100-pound woman tossing Ah-nuld around like a rag doll.

Outside of one chase scene that goes on far longer than it probably should, and the "I'll be back" jokes that get a little stale by the end of the movie, "T3" is a well-done and entertaining joyride. It's just what you expect from a summer movie, and exactly what you hope for (but don't always get) from a Schwarzenegger flick.