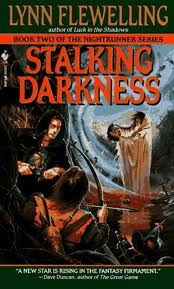 There's nothing like discovering a good series when a couple of the books are already out. The day I finished "Luck in the Shadows," I went right out in search of "Stalking Darkness," and I was able to dive right back into the story.

And it was definitely worth jumping right back into. Alec and Seregil hardly get a rest when their first adventure is over before another crisis threatens the world. As war brews, an evil artifact is stolen from the Oreska House. In the midst of this Alec is learning the truth of his heritage.

While good old-fashioned swashbuckling and strong imagery powered the first installment of this series, "Stalking Darkness" focuses more on character. Flewelling builds on the relationships between Alec, Seregil, Nysander and Micum and Beka Cavish. When this story ends, no character is left unchanged. She even makes the despicable Thero seem almost sympathetic.

Another thing I like about this book is Flewelling's willingness to take chances. One in particular will likely make more than a few readers uncomfortable, and from some of the comments I've read, it may even turn some people off the series completely. That's a real shame. Other readers have taken it in stride though, and some even find it refreshing. All I know is that I thoroughly enjoyed this book, and I can't wait to dig into "Traitor's Moon."

This series is shaping up as one that's worth checking out. 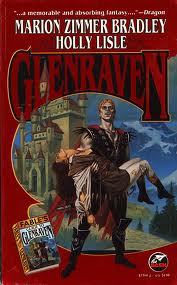 When two women looking for a change in life plan a trip to a small mountain resort in Italy, they get much more than they bargained for.

JayJay Bennington picks up a travel guide to a small principality named Glenraven in her local bookstore. After reading about the charms of the country, and learning that it's only open to tourists for a limited time, she decides on a trip. Her friend Sophie goes along, and together they are pulled into a world very unlike the sleepy North Carolina town they hail from.

The pair learn that the book was a magical artifact sent to their world to bring back heroes, but Sophie and JayJay are far from what they expect.

The most striking thing about this novel is the vividness of the world it's set in. The magical kingdom of Glenraven is brought to life by Bradley and Lisle, a memorable land inhabited by memorable people.

Glenraven is a good read, and I'm looking forward to the sequel.

Review: "Luck in the Shadows" by Lynn Flewelling 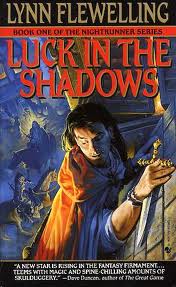 Most readers and writers now are looking for fantasy with something a little different -- fantasy that avoids quite a few of the things that the foundation of the genre is built on.

That's all well and good, but every now and then you just need one of those books with a dashing, roguish hero helping a mysterious magician defeat an absolute evil. That's exactly what Lynn Flewelling delivers in "Luck in the Shadows".

Alec of Kerry is wrongly imprisoned along with our dashing rogue, Seregil, who frees him and begins a grand adventure. Alec, a farmboy, is thrown into worlds he never new existed when he becomes Seregil's partner in crime and society and a Watcher for the wizard Nysander. When Seregil pockets an evil artifact, he enmeshes the pair, along with Nysander and Micum Cavish in someone's sinister plot to awaken an ancient evil. It's up to Nysander and his Watchers to stop that from happening.

I know. Sounds like a pretty basic fantasy plotline, and it is, but it's pulled off masterfully with wonderful language and striking descriptions. Flewelling's eye for detail puts you in the room as Nysander struggles to lift a curse and puts you alongside Alec on his first excursion as a thief.

This book is one that's hard to put down, especially if you're a fan of traditional fantasy.

But it's not only for those who like the more standard approach, either. Just because the novel doesn't "break the mold," doesn't mean there aren't some interesting twists. There are plenty -- but I'm not going to give them away here. You'll just have to read the book.