Review: "The Wolves in the Walls," by Neil Gaiman and Dave McKean 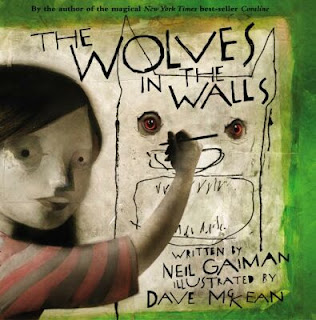 I originally reviewed this book when it came out in 2003, a couple of years before I had a child of my own. In the last few weeks, my three-year-old and I have begun starting to explore a few books outside the realm of the standard Dr. Seuss-style children's books that we've been reading forever (not that there's anything wrong with those; we still enjoy them quite a bit). I quickly found out that he's not ready for books without pictures yet, when I tried "The Hobbit." (I know, I know, but I just can't wait to read it to him.) One of my next attempts was "The Wolves in the Walls." He absolutely loved it, and we've been reading it at least once or twice a night for the last week. I still find it a delightful book, and Dave McKean's occassionally creepy illustrations don't seem to scare him a bit. So, here's my original review from five years ago, and I find it still very much fitting:

No one's really sure why it's all over, or even what "it" is. But they all say it, so it has to be true, right?

When Lucy begins to hear scratchings and rustlings in the walls of her home, she knows the wolves have come. The problem is that no one in her family believes her. When she brings it up, they all think she has an overactive imagination, and they all tell her the same thing - "When the wolves come out of the walls, it's all over."

Review: Stephen King, "Song of Susannah" and "The Dark Tower" 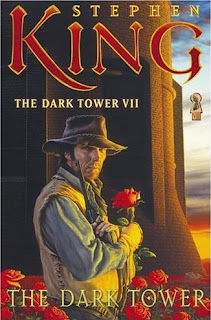 So ends a 20-plus year oddyssey in my reading life. I remember in high school reading that line: "The man in black fled across the desert and the gunslinger followed." A great opening line. One of my favorites ever. I devoured the first three books in the series and waited and waited and waited some more. So, it's a bit ironic that after years and years of complaining about the fact that Stephen King seemed unable to finish the Dark Tower series, it took me four years to get around to reading the final two installments. Since most people with a strong interest have already read these books, rather than a formal review, I'll just offer a few thoughts on these two books and the series as a whole.

It's sad, but I'll admit that on hearing Stephen King was hit by a van in 1999, one of the thoughts that crossed my mind was, "now we may never get the end of the story." It sounds horrible to say that, but unlike other characters whose story has been drawn out over too many years (Rand al'Thor, whose author did pass away before giving readers a finale, for example), I've never lost interest in Roland Deschain. I'll admit to having a strong interest in mysterious, gruff cowboy characters. I've even written one or two myself -- though certainly not comparable to Roland. He's a fascinating and tragic character. 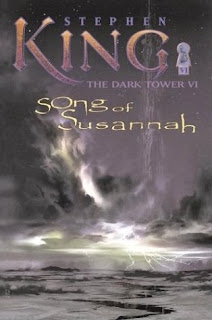 When "Wolves of the Calla" arrived, I bought it immediately and jumped right back into the story. But for some reason, when "Song of Susannah" and "The Dark Tower" came out, I didn't get them right away. I could offer excuses, sure. I had a stack of books to be read for review that I didn't have time to get to. Maybe I couldn't afford the hardcover editions of the books at the time they came out. But, deep down, I wonder if, after so many years with these characters, I didn't want to see the story come to an end.

I read the final two books over the last few weeks with mixed feelings. The story, which had seemed a little stalled over the course of "Wizard and Glass" and to a lesser extent in "Wolves of the Calla," got moving again, zipping right along. I was less enthused with the way that King insinuated himself into the story. At times, it seemed a bit arrogant to me. Sure, we all know where the story flows from, but it just seems a little too full of yourself, particularly when the story would likely have worked just as well without it. But I guess, when you're Stephen King, that's your prerogative. Though at times annoying, it was not enough to ruin the story for me.

Ultimately, at the end of the 20-year road, I was satisfied with the outcome. I'd recommend you consider sai King's suggestion at the end of the book to stop and let the characters sail off to the Grey Havens. I almost wish that I had, but like most readers, I had to push forward and see what was inside the tower. I won't give it away, but as King suggests, I think the journey is the heart of the tale rather than the destination that the seven books have revolved around.

The story is done, the book is closed. We say thankya.