Review: "Dead as a Doornail" by Charlaine Harris 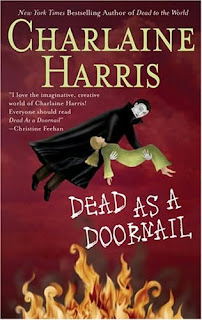 Often I say that picking up a new book in a favorite series is like visiting an old, familiar place. In this case, it's very familiar. Charlaine Harris' town of Bon Temps may not actually exist, but you know the town and you know the people in it - well, except for the vampires and werewolves, of course.

"Dead as a Doornail" ($22.95, Ace) is the fifth novel in Harris' "Southern Vampire" series, and I've enjoyed every one tremendously, in part due to the familiarity. Bon Temps, if it existed, would be out on the backroads, roughly somewhere between Ruston and Monroe. Harris drops in a lot of nice references to familiar places. But, as I said, even the things that aren't real are recognizable. For example, everyone knows a simple, no-nonsense woman like Harris' Sookie Stackhouse, though the one you know is probably not a mind-reader.

This time out, there's a shooter targeting shape-shifters in the area, a group that Sookie's brother Jason has lately joined against his will, thanks to a bite from a shifter. The police think the shootings are random and only a few people know the truth, since the shifter community hasn't gone public like vampires. What's worse, many in the shifter community are suspicious of Jason and some have even called for his execution.

As if that weren't enough for her to deal with, a pair of private investigators come snooping around trying to find out what Sookie knows about the disappearance of one Debbie Pelt from Jackson, Miss. She knows quite a lot about it actually, since Sookie was the one who shot and killed the shifter in self-defense. Having only the word of the amnesiac vampire that took a bullet intended for Sookie, she decided to let him cover it up instead of reporting it - not one of her brightest moments, and one that may come back to haunt her.

There are also entanglements in Sookie's love life. Her former vampire boyfriend Bill returns. An interesting new vampire bartender Charles arrives to fill in at her workplace. A surprising romance blooms with her boss Sam, and Shreveport businessman Alcide Herveaux has a proposal for her. And that's not even all that's going on in this book.

"Dead as a Doornail" is perhaps the most complex book so far in the series. Harris introduces us to more characters and gives us a closer look at the were/shape-shifter communities. There are also many more small threads woven into the tale than in previous stories, some offering interesting lines for future volumes.

We also see for the first time a more vulnerable Sookie. Her waffling between love interests at first makes her seem more wishy-washy than the tough cookie we've seen in previous books. On second thought, though, all good heroes have at least one major failing, and perhaps we've just found hers.

Where the tone of the previous installments has been more light-hearted and humorous, "Dead as a Doornail" takes a darker turn - one which actually started at the end of the last book, "Dead to the World." While there's always been an element of danger to the books, it seems even more palpable in this one, and the jokes take a back seat.

It's still a heck of a lot of fun, though. If you haven't read Harris' novels, you might want to check one out. You never know what's roaming the backroads of our area.

As I write this, I find myself a little embarrassed to be an American. That's not something I feel often. But, you see, I just finished watching "The 100 Greatest Americans" on the Discovery Channel, a list chosen by the people, and I don't have much hope for us.

The premise is a tough one to start with -- to choose the greatest Americans in the 229-year history of our nation -- but surely we can do better than this. The list was loaded with entertainment personalities. Do some actors and musicians deserve to make the list? Probably. You could certainly make arguments for Jimmy Stewart, John Wayne and Katherine Hepburn, who were all on the list. Musically, you can argue in favor of guys like Louis Armstrong and Duke Ellington, who were left off the list. But Tom Cruise and Madonna? What's worse, Madonna wasn't only in the top 100, she was in the top 50. Does anyone out there really believe Madonna is one of the 50 greatest Americans in history? Apparently so.

Then there's Michael Jackson, who is currently on trial for child molestation. If he's guilty, that would mean that voters think a pedophile is one of the 100 greatest Americans. What does that say about our country?

Plenty of other choices left me scratching my head. Brett Favre? If the list were the 100 greatest athletes, I'd say absolutely. George Lucas? You won't find a much bigger "Star Wars" fan than me, but he doesn't rank on this list. Rush Limbaugh and Michael Moore? I guess, at least, we can be thankful that there was fair representation for blowhards.

Athletes took their share of the list, too. One of the most amazing ones for me was the ranking of Tiger Woods over Jesse Owens. Sure, Tiger broke the color barrier in golf, but Owens only went to Berlin and embarrassed Hitler by proving that, at least in athletics, the Aryan race wasn't superior. By comparison, I don't think Woods deserves as much recognition as other athletes on the list who faced adversity, like Owens, Jackie Robinson and Muhammad Ali. And what about Arthur Ashe, who wasn't even on the list? He did basically the same thing as Woods and then used his position to work for change - something Woods hasn't done.

Then there's the top 25, which is the group that voters will ultimately choose the "Greatest American" from. Let's start with George W. Bush and Bill Clinton. There are arguments in favor of putting both men in the Top 100, but does either really belong in the Top 25? Then we have Oprah, televangelist Billy Graham, Bill Gates, Elvis. Top 100? Probably. Top 25? I don't think so.

When I think of "Greatest Americans," I think of people who have made great sacrifices and great contributions to preserve or improve our way of life. I think of people who have made a lasting impact, one that we can see in our everyday lives. To be fair, there are excellent choices in the Top 25 -- Martin Luther King Jr., Einstein, Edison, Washington, Lincoln, Rosa Parks, FDR. But I'm incredibly disappointed in my fellow Americans over much of the list.

I've always wanted to believe the majority of Americans are not as shallow as we're often portrayed. After seeing this list, I'm beginning to think those portrayals may not be so unfair after all.
Posted by Fred Phillips at 2:47 AM No comments:
Labels: Random rants

Finally, there's new content on the site. There are nine new album reviews on the featured music page, and I'm working furiously to get more up on the archive page. I've also got a couple of new book reviews I'm trying to get online. You can expect regular updates to resume soon.
Posted by Fred Phillips at 2:42 AM No comments:

Just wanted to check in with anyone who might happen to be visiting with any regularity. The site hasn't died again, I've just been pretty busy, what with a new addition to the family and all. I've got tons of updates ready to roll just as soon as I get the chance to do it.

In the meantime, you can check out some more recent album reviews at DigitalMetal.com.
Posted by Fred Phillips at 3:02 AM No comments:
Newer Posts Older Posts Home
Subscribe to: Posts (Atom)