Review: "The Scar," by China Mieville 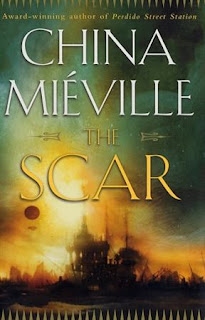 China Mieville's last book "Perdido Street Station" drew praise from fantasy fans and literary types alike. The book, which racked up awards and nominations, took the conventions of the fantasy genre and turned them inside out.

Now, Mieville unleashes the follow-up, "The Scar" ($18.95, Del Rey). While the two novels are connected by a shared world, "The Scar" is no sequel. The connection between the two is tenuous and no prior knowledge of the world is necessary.

Bellis Coldwine is fleeing her home in New Crobuzon. She has bluffed her way aboard a ship bound for the city's colonies by claiming proficiency in Salkrikaltor, the language of a crustacean-like people the ship will be meeting with. She's looking to get away from New Crobuzon for a few years in hopes that people there will forget about her current predicament. Bellis gets her wish, but her stay away from the city may be much longer than she anticipated.

The ship is hijacked by pirates and taken to the strange floating city of Armada, where she meets an even stranger cast of characters. The Lovers, the couple who rule the pirate city, are hoarding scientists and books for a secret quest. They intend to raise a creature of legend from the depths of the sea and harness it to move the city to The Scar, a point in the ocean that holds great power for someone who can control it.

While the book is ostensibly about Bellis Coldwine and her struggles, the real main character is the city of Armada. The floating fortress cobbled out of stolen boats is truly one of the more inventive fantasy settings I've ever encountered. The features and creatures of this isolated city continue to surprise and impress the reader throughout the story.

The world as a whole holds the same kind of fascination. It's peopled with races that stretch the reader's imagination to the breaking point - blood-sucking mosquito people, prickly cactus men and of course, the crustacean clan. Most interesting perhaps are the Remade, people who have been surgically altered, usually as punishment. Some have mechanical parts, others tentacles and deformities, but all find a home and a use in Armada.

The downside is that Mieville's literary tone and style can get a bit stuffy from time to time. That occasionally detracts from the sense of wonder provided by the amazing setting.

Overall, though, Mieville is one of the most interesting writers to hit the fantasy genre in a long time. This mixture of literary fiction, steampunk, urban fantasy and dark fantasy is sure to be a favorite of people who are looking for something different, both in and out of the fantasy genre.