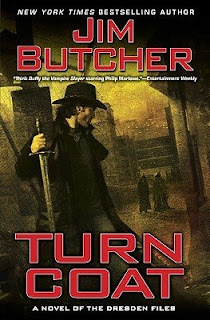 What do you do when a long-time rival turns up on your doorstep looking for help? That’s the question that faces wizard-for-hire Harry Dresden in Jim Butcher’s latest, "Turn Coat" (Roc, $25.95).

Donald Morgan, the warden of the White Council who has hounded Harry for years for his suspected use of black magic, shows up at his apartment, seriously injured and on the run. Morgan has been accused of the murder of a senior member of the White Council, and the evidence against him is pretty convincing. Morgan was, in fact, found standing over the body, holding the murder weapon, only moments after the wizard was killed. Then, he wounded three wardens in his escape. He’s being hunted by the other wardens (though some, like Harry himself, have not been notified of the man hunt), and there’s a bounty that’s drawn all manner of supernatural creatures to try to bring Morgan in.

His own experience tells Harry that Morgan is not the kind of man who would turn against the White Council, and he suspects there’s more than meets the eye. Due to their past animosity, it’s the last place Morgan’s hunters would expect him to go for help, and Dresden offers him shelter and aid. The gesture puts him on a path that’s likely to get him killed along with his old rival if he can’t find the real killer before the White Council finds Morgan.

I’ll admit that I’m a complete fanboy of Butcher’s Dresden Files at this point. I can’t remember the last time that I still found the 11th book in a series as entertaining as the first. While most series are losing steam, Butcher’s is shifting gears. The action in "Turn Coat" brings readers to a new chapter in Harry’s story. The events in the book will give him new status and perhaps a slightly altered outlook on life, as both he and members of the White Council are forced to take a hard look at their values.

But the added inner struggle doesn’t detract from what has always been the hallmark of the Dresden Files -- interesting characters and fast and furious action. We get plenty of both here as we get a little more insight on some of the council members who have been a bit mysterious through the first 10 books. There’s also a new baddie -- a skinwalker from Native American legend -- and a battle between the beast and Native American wizard Joseph Listens-to-Wind is spectacular.

At a point in the series where I’m usually calling for the author to retire his hero and move on, Butcher and Dresden continue to excite. Here’s to 11 more books just as good as the first 11.