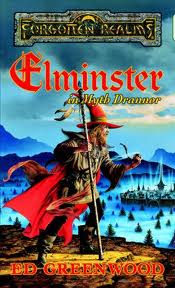 Occasionally, a character or writer I particularly liked during my "shared world" days will draw me back into those books. Such is the case with this one.

This is the second book in what appears to be a series by Ed Greenwood on the life of the mage Elminster. I enjoyed the first book "Elminster: The Making of a Mage", several years ago when it first came out, but this one didn't live up to that promise.

In this book Elminster journeys to the land of the elves, where, being human, he runs into the expected problems as he learns their ways and their magic. The book is entertaining enough, but a bit mediocre. It's not particularly good and not particularly bad, just kind of hanging in limbo.

One of the reasons is that, instead of simply telling the story, Greenwood tries to make the story fit with the rules of AD&D. That just doesn't work. Several times during the story, there were terms and references to the game that seemed out of place, and they took me out of the story itself. I find Elminster a fascinating character, as well as some of the elves he encounters. I think this could have been a much richer book if he had thrown the AD&D manual out the window.

This is good for a quick read when you don't really have time to concentrate on a book, and I'm sure fans of Elminster and Greenwood will love it as well. As I said before, it wasn't that bad, it just wasn't that good either.