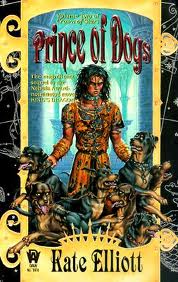 The first book of this series, "King's Dragon", was one of the best books I read last year. It was a wonderful start to a promising series.

Prince of Dogs continues that series and does it well, though perhaps not as well as the first book. This book follows Liath, Alain, Sanglant, Fifth Son and all of the characters you came to care about in the first novel as the war with the Eika and the strife within King Henry's own realm continue.

While the backdrops are interesting, they're relatively minor compared to the strife in the lives of each of the characters. Elliot is a master at torturing her characters, which is something I really admire in an author. A writer that can wrench my gut, as Elliot did by throwing Liath back into the clutches of Hugh, is a writer that can keep me reading.

It's not all great, though. At times this book could have benefitted from some editing. This doorstop probably could have been trimmed down to 400-500 pages just by removing padding. At several points during the book, long passages from histories are read, long tales are told by bards, and long philosophical discussions are held. These show the work Elliot has done in crafting her world, which is great, but none of these have any real bearing on the story. Instead, they bogged it down. I have to admit to skimming over most of them after a while and getting on to the story again.

Despite that, this book is still an excellent read. I'm looking forward to the next volume from Elliot.