Review: "The Strain" by Guillermo Del Toro and Chuck Hogan 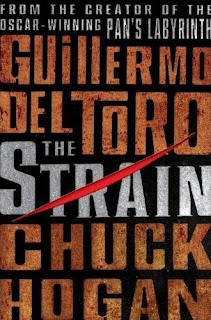 I was immediately intrigued on receiving "The Strain" ($26.99, William Morrow), the debut novel from director Guillermo Del Toro and co-author Chuck Hogan. Over the past few years, I've become a big fan of Del Toro's films, and I was wondering how his style would translate into print.

In the novel, a jet on a flight from Germany lands at JFK in New York. Everything seems fine until the plane stops dead on the runway with no power and no communication. Nearly everyone on board is dead with no visible signs of trauma or illness. Most of the passengers are still seated as they would have been in normal circumstances. The case gets stranger when the bodies get to the morgue, and the medical examiner performing the autopsies finds some very strange clues about what might have killed them. But when the bodies mysteriously disappear from the morgue, it becomes clear that an ancient evil has re-emerged. New York will soon be thrown into chaos, and the entire world may follow.

In these days of vampire overload, just the mere mention of the v-word on a book cover is usually enough to make me pass. But I trusted Del Toro to provide something fresh and interesting to a genre that has rapidly grown stale. I wasn't disappointed. There are no fangs, pretty boy vampires or glamour here. Del Toro's vision of the vampire is brutal, ugly and monstrous.

Rather than the romantic notion of the vampire that seems to have flourished in recent years, Del Toro and Hogan's creatures are the victims of a plague that changes the body in horrific ways, making them essentially walking viruses. At least in the early stages of the disease, the vampires are mindless feeding machines, more akin to zombies.

The scientific approach to vampirism is interesting, if not entirely new, but it also presents a slight challenge in suspension of disbelief as many of the usual weaknesses of vampires (sunlight, silver) are also attributed to these creatures. The reasons for these weaknesses are really not explained in the book and may cause the reader to question why some of the classic rules of vampire mythology apply to these new creations.

"The Strain" is well-written and, after a lengthy amount of set-up and background, a fast-paced read. I was a little disappointed that I didn't get the sense of macabre wonder from the book that is a mainstay of Del Toro's films. Naturally, it's destined for the screen, and I'm anxious to see the director's vision, particularly for the character of The Master.

All in all, "The Strain" serves as a solid introduction for Del Toro in the print world, and I'll look forward to reading the next installment in the planned trilogy of vampire tales.