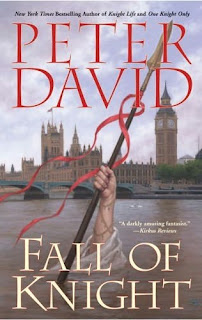 Arthur Penn, former president of the United States, plans to live the rest of his life peacefully sailing the world on his yacht with his wife Gwen in Peter David's latest, "Fall of Knight" (Ace, $24.95). The only problem is the former first lady was shot by a terrorist and medical experts from all over the world said she would never come out of a coma.

When a satellite photo of Arthur and Gwen apparently living happily ever after shows up on the news, people want answers. Perhaps telling the truth — that Arthur is, in fact, Arthur Pendragon, king of Camelot, and he healed his wife with the Holy Grail, which he won in a battle against Sumerian legend Gilgamesh with the aid of a Moorish Knight of the Round Table named Percival and a Noah-like sailor named Ziusura — was a bad idea.

Proving the claim by using the Grail to treat a fallen journalist covering the story turns out to be an even worse idea as, suddenly, Arthur finds himself besieged by people needing help and even as the focus of a new religion.

But the worst is yet to come when Merlin discovers that the Grail's companion piece, the Spear of Destiny, is also back in play, and the combination of the two could have disastrous results. Unfortunately, before he can warn Arthur, he's imprisoned by Nimue, the Lady of the Lake.

The third book in David's satirical modern-day Arthur trilogy provides as many chuckles as the first two, and just as much food for thought, as well. While telling a fun adventure story, he also skewers several aspects of modern life from politics to religion to frivolous lawsuits.

Those prone to being offended may want to give the book a pass. The story deals with two legendary items closely associated to Christ — the cup he drank from at the last supper and the spear that pierced his side on the cross — and some of the fictional revelations in the book are a bit irreverent. It is, after all, a comic fantasy. But at the end of the day, the story serves more as an affirmation of faith.

Even more interesting to me, a long-time devotee of the Arthurian legends, is the story that serves as the backdrop for "Fall of Knight." Without giving anything away, I'll just say that it's a tale of Merlin and the origin of Excalibur that rivals any other that I've read.

The trilogy, which also includes the books "Knight Life" and "One Knight Only," is a fun update on the Arthurian legends. I'd definitely recommend it for Arthur buffs with a sense of humor. 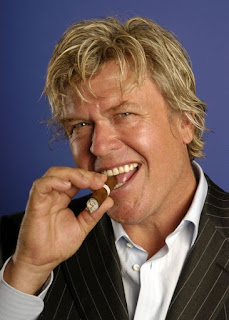 Though he came to fame through the family-friendly Blue Collar Comedy movie series, Ron White advises folks not to bring their kids to his solo shows. During those shows, he saunters across the stage sipping 25-year-old Macallan scotch, puffing on a cigar and liberally peppering his speech with expletives. This definitely ain't a Blue Collar show.

"People bring their kids and say, 'oh, you're not going to say any words he hasn't heard,'" White said with a laugh. "Yeah, well I'm going to say them in a new order, and sometimes that's all that matters when it comes to words is what order were they said in."

White is unapologetic about his language on stage. It's not profanity just for profanity's sake, he says. He only includes it if it's funny. Which is why he was upset when the distributor of his latest record, "You Can't Fix Stupid," chose to issue a bleeped version so it could be sold in Wal-Mart.

"The stupid thing is, if we had released it like we did the last one that made a gillion dollars, just don't give it to Wal-Mart because Wal-Mart will put the DVD in their store uncut," he said. "It makes no sense at all, and it will sell like hotcakes."

Ultimately, though, the records don't really matter to White. His true love is the live show, being up on stage in front of the crowd. In fact, he uses very little material from his first two records in his live show and says he may never do another recording because he wants fresh jokes for the crowd.

"The only thing I care about is the live show," he said. "I wish I hadn't put out the last album because then I could have all this stuff and people would have never heard it. I want to do shows that people have never heard."

Of course "You Can't Fix Stupid," was the No. 1 comedy album in the country for nine weeks, and he said it's still selling well. But you still won't hear many of the jokes in his live show.

"I'm not concerned about being a top-selling recording artist," he said. "I'm more concerned about having a live show that people respond to instead of clap to because they're getting beat up. I'm just now getting back to that. If you see me release a new record, you can bet I just quit touring."

White also has a new book on shelves, "I Had the Right to Remain Silent ... But I Didn't Have the Ability."

"It's a book with big, big margins, large print and lots of pictures," White said. "Perfect for any man. It's a toilet book, put it up on the back of the commode."

White admits that there are a few road stories in the book that, in hindsight, he wishes he hadn't told, but ultimately he thinks they'll help sell the book. Not that he really cares.

It's the same reason he regularly turns down movie and television offers. He said the schedule would take away from his career as a comic.

He is however working on an animated series, which only requires him to do voicework once a week. He's pleased with the way the project is coming and hopes someone will pick it up.

White and the other Blue Collar comics recently wrapped up their third movie, "One More for the Road," which White said emphatically will be the final movie in the series. Jeff Foxworthy is semi-retired, and Larry the Cable Guy and Bill Engvall, like White, are busy trying to extend the success they've received from the series.

"We had a great ride," he said. "We're all still dear friends. If Jeff wanted to get together and do another live show for the troops or for charity, if there were some reason for all of us to get together for some cause, we would do it. But you've got to find Jeff; he's out killing (stuff)." (Foxworthy is an avid hunter.)

As for White, he's completely happy with where his career is right now. He tries out new material every week at open mic night and his shows continue to be sold out. Even his wife, the butt of many of his jokes, doesn't mind the ribbing.

"She cashes the checks, so she doesn't care," he said. "Everybody in my family knows the show's off-limits. It's probably not about her anyway. It's just a joke I wrote. If I tag your title to it, you can't come tell me about it."

Most of the jokes, however, are based on events that really happened to friends or family members, but they're changed for comedic purposes. One exception may be Cousin Ray, who has been the butt of jokes about hunting and being a homophobe.

"Cousin Ray is the real deal," White said. "But he loves being in the show."
Posted by Fred Phillips at 12:44 PM No comments:
Labels: Comedy, Interviews
Newer Posts Older Posts Home
Subscribe to: Posts (Atom)