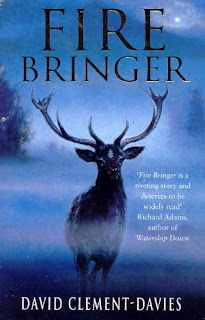 Anthropomorphic tales are a tried and true standard in fantasy fiction. From Richard Adams' "Watership Down" to E.B. White's "Charlotte's Web" to numerous Disney productions, these tales of animals that talk think and act like humans have entertained both children and adults.

In "Fire Bringer" (Dutton), David Clement-Davies tries to put his own twist on the anthropomorphic tale by personifying the deer of historic Scotland. The famous Disney production is the only time I've ever seen deer portrayed anthropomorphically - and this tale is certainly not "Bambi."

A newcomer to the herd, the antlerless buck Sgorr, manages to gain the trust of Drail, the Lord of the Herd. He has convinced Drail to do away with many of the traditions and the Lore of the deer's god Herne. Sgorr has also brought violence to the herd, teaching the young bucks to sharpen their antlers to maim and even kill in the rite of Anlach, the rut. Then, in one bloody night, the schemes of Sgorr and Drail come to fruition and the herd falls completely under their control. Other herds follow as the pair turns its attention to domination.

But during that violent night, a special fawn is born, bearing a white, oak leaf-shaped mark on his head, a mark named in prophecy. When the fawn's father is killed by Sgorr and Drail, Rannoch's mother trades him with another doe whose calf was stillborn to protect the fawn. Rannoch and his adopted mother live in peace for a while with the herd, but during a run in with some yearlings loyal to Sgorr, Rannoch's mark is revealed. Drail, fearing the prophecy, orders him killed, and Rannoch is forced to flee.

With several of his friends who were also threatened, he travels across the land of Scotia, trying to avoid Sgorr's assassins and the many other dangers of the wild - including man. All the while, Rannoch marches ever closer to fulfilling the prophecy.

The first challenge of anthropomorphic fiction is the suspension of disbelief. A writer has to engage the reader and make the reader accept that these animals are talking and acting much like humans. Clement-Davies does this masterfully. Although I was a bit skeptical at first, I came to know the characters and fell right into the story.

Oddly, the problem I had with the book had nothing to do with believing in talking deer. Instead, it was the info dump in the early part of the book. There is a ton of background information on deer stacked up at the beginning, and I was wondering if there was going to be a story. This problem returns at several key points in the novel, with some asides that are meant to make the story sound as if it's being told by a storyteller years later. Instead, they disrupt the spell the story is weaving around the reader.

Fortunately, the story itself is so good that these are only a minor annoyance. After the first few pages, I wasn't sure if I wanted to continue, but by the time the old storyteller Blindweed had finished reciting the prophecy to a group of fawns, I was hooked. I spent much of the rest of the book spellbound, hanging on every word.

It's one of the oldest stories known to man: A child of prophecy flees a ruler who fears that prophecy, and on his journey, he grows and learns enough to return and try to set things right. Still, in "Fire Bringer," Clement-Davies has managed to make the old tale riveting.

Clement-Davies shows the ability to take readers on a roller-coaster ride of emotion. He makes you feel revulsion at the insane acts of Sgorr, the hopelessness of those under his rule and the fear and uncertainty of his friends when Rannoch has his moments of doubt and denial. That's balanced in equal parts with feelings of triumph, joy and love when things are going right for Rannoch and his friends.

These days, few books are making it to the bookcase I reserve for those that mean a little more, but this one has earned a spot there. In short, "Fire Bringer" has everything that makes a classic tale for young and old alike.