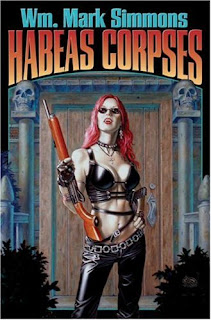 To catch you up if you're not familiar with previous books "One Foot in the Grave" and "Dead on my Feet," Cséjthe (pronounced Chay-tay, for the uninitiated) was given a blood transfusion from a vampire. The transfusion transmitted half the virus that causes vampirism without fully transforming him, making him unlike any creature seen before. In the meantime, he's caused a lot of trouble for the undead community, including in the last book, becoming Doman of the New York clan of vamps.

This time out, Cséjthe is laying low in his secluded home on the Ouachita River with his werewolf lover Lupé, his vampire protector Deirdre and a 1930s Chicago gangster vamp, The Kid. So far, they've been able to repel all the attempts on Chris' life, but then things take a strange turn. First, there's a psychic e-mail, then a special delivery of a still-beating heart in a jar and finally an attack from a nearly indestructible Frankenstein monster.

It all adds up to a trip to New York to finally take the reins of the vampire community there and try to uncover the secrets of this new threat. He soon finds those may be just the beginnings of his problems.

As in the previous two volumes, Simmons layers the story with multiple villains. There's a classic horror monster, a historical bad guy and a technological terror for Chris to tackle. To avoid giving anything away, I'll leave those up to the reader to discover.

"Habeas Corpses," as you might guess by the title, also delivers the same humor that has permeated all six of Simmons' novels. It's been said of him that he never met a pun he didn't like, and it's absolutely true. Readers will also have a lot of fun picking out the pop culture references littered throughout the book. There's just something too funny about an argument between a vampire and a werewolf about whether Buffy or Anita Blake is the best vampire hunter.

As usual for Simmons, "Habeas Corpses" provides a fun romp through the supernatural, classic horror, science and history. The story raises some serious questions currently being tackled in the real world, but refuses to take itself too seriously, a refreshing trait among vampire novels. 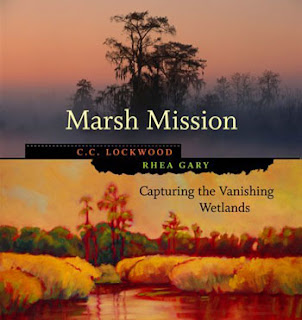 When photographer C.C. Lockwood and artist Rhea Gary put together "Marsh Mission: Capturing the Vanishing Wetlands" ($39.95, LSU Press) they expected it to provide a glimpse of wetlands that would one day be gone. I'm sure they didn't expect those wetlands to be unrecognizable this soon.

Following the ravages of Hurricanes Katrina and Rita, many of the areas photographed and painted are greatly changed from the scenes depicted in this book just last year. But there's still a chance to save them, and that's what this book is all about - drawing attention to some of the beautiful and essential wetland areas of Louisiana that are in danger due to coastal erosion.

The book began with a year-long journey through the wetlands on a houseboat by Lockwood and his wife, Sue. They covered more than 5,000 miles, capturing life on the coast of Louisiana. During that year, Gary also spent time on the houseboat, painting the scenes they came across.

The result is a gorgeous collection of photographs and paintings that leave out no scenes from the area. Lockwood's photographs run the gamut from a spoonbill pelican feeding its young and misty mornings on the bayou to photos of oil rigs and the muddy waters of a diversion canal. Most of Gary's paintings depict the remote landscapes of the marshes in vivid colors. Most interesting are the times when Lockwood and Gary focus on the same subject. It's interesting to see, side-by-side, the interpretations of Lockwood's camera and of Gary's brushes.

Perhaps the most effective and haunting images in the book are in the epilogue, which focuses more on the loss and destruction than the beauty. Particularly striking is the image of a large live oak tree, now dead, its root system exposed and hanging half into the surf of a beach on Cheniere au Tigre. In the background, you can see a camp, with waves lapping at its door, that once had a road and 40 feet of beach in front of it. It's a visceral testimony to the erosion that's occurring on the Louisiana coastline. 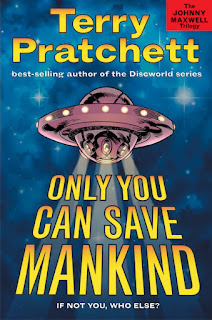