Review: "Dead in the Family" by Charlaine Harris 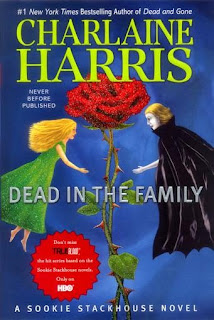 I guess everyone needs a break now and then, and certainly Charlaine Harris’ telepathic waitress Sookie Stackhouse has hit a lull in the series’ latest entry “Dead in the Family” ($25.95, Ace).
It’s not that there’s not plenty of action in the book. Quite a bit happens. In fact, the story is kind of like a supernatural family reunion as more fairy members of Sookie’s family show up, members of the vampire Eric’s family arrive to cause trouble, some secret’s about Bill Compton’s family are revealed and even Merlotte’s owner Sam is having troubles with his family because of the weres and shifters going public.

Among all that, there are also larger problems in the world of the books. Most notably, some are pushing for registration of the two-natured, just as they have the vampires who went public. Eric is still having troubles with his new boss in the vampire world, Victor Madden, and there’s upheaval in the Shreveport pack of weres.

Despite all that, “Dead in the Family” seems to plod just a little. There are flashes of action here and there, but it just doesn’t quite have the same spark that some of the previous volumes had. It’s more like a breather in between the explosive action that ended the previous volume and things that are on the horizon.

It also seems to me that there’s a little more of HBO’s “True Blood,” based on the books, seeping into Harris’ work in this volume. Certainly for those of us who both read the books and watch the series, the differing storylines can get a bit confusing. For example, I was almost sure that Bill had told Sookie in a previous volume how he was turned, but now I’m thinking that might have been in “True Blood,” and either way, the story that I’m remembering differs from the one told in this book.

At the end of the day, “Dead in the Family” is still an enjoyable read and it keeps me interested in the continuing story of Sookie and all of the strangeness that surrounds her. But it doesn’t leave me with that same sense of excitement that some of the earlier tales did. Hopefully things will get back on track with the next volume. 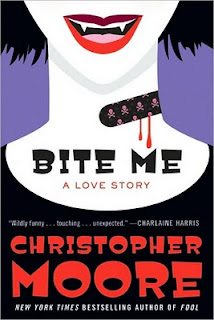 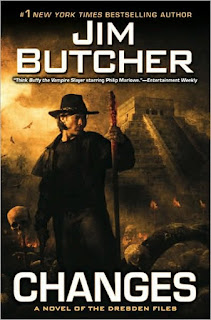 After a series goes on long enough, there inevitably comes a time when a drastic shift is needed to keep it from going stale. That time for Jim Butcher’s Dresden Files comes with its 12th book, “Changes” ($25.95, Roc).

The shift begins with the book’s title, which drops the two-word puns of the previous 11 volumes. It mirrors a shift in the demeanor of the books. Things are about to get much darker and much more serious for Chicago’s only wizard for hire.

Harry gets a gut-punch with the first line of the book where he’s informed that he has an eight-year-old daughter that he’s never known. The news is delivered by her mother, Harry’s old flame Susan, now a half-vampire member of a secret warrior society that hunts Red Court vampires. The child, Maggie, has been abducted by the vampires and, naturally, they have nasty plans for her.

Normally, Harry would have plenty of backup as the White Council of wizards and the Red Court vampires have been at war, but he’s unable to call on the aid because Duchess Arianna Ortega of the Red Court has sued the White Council for peace. The request has split the council, with many seeing a hope to end the war that has decimated their ranks and others seeing a trick by the vampires. It’s up to Harry and a handful of friends to rescue the girl, a task made even more difficult by vampire plots that have led to an FBI investigation into the destruction of his office building among other complications.

I say this book has a more serious tone, but fans of the series shouldn’t be worried about that. Harry is still the wisecracker that he’s always been, and it’s loaded with references to science fiction and fantasy classics like “Star Wars,” “The Lord of the Rings” and “The Wizard of Oz.” There are plenty of chuckles and light-hearted moments to be had during a more intense story line. Despite all that’s going on around him, Harry is still Harry, after all.

On the other hand, there are events that happen in the book that will, necessarily, change things for Harry forever. I won’t give those events away, but they make it very hard to believe that he’ll come out of this as the same low-rent, high-powered private investigator that he’s been for the better part of the first 12 books. He’s now entangled with far too many greater powers in the supernatural world, and those entanglements promise to make things even more treacherous for him.

The strength of Butcher’s stories continues to be the fast pacing and fascinating characters that he’s delivered throughout the series. The centerpiece of “Changes,” though, may be the final battle which is more grand and sweeping than anything we’ve seen before in the Dresden series. It pays homage to his love of more traditional fantasy and delivers a spectacular finale to the story.

Serious “Changes” are definitely coming for our old friend, but having given me some of my favorite tales over the last decade or so, I’ll trust that Butcher will take the the stories in an even better direction.