Review: "The Slow Regard of Silent Things" by Patrick Rothfuss 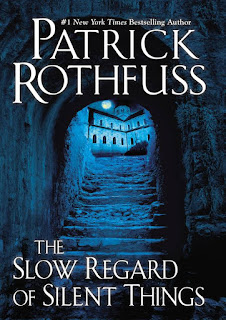 Patrick Rothfuss warns us in the prologue to “The Slow Regard of Silent Things” ($18.95, DAW) that fans of the Kingkiller Chronicles may want to skip this novella. If they do, though, they’re missing out.

True, this slim volume doesn’t really move Rothfuss’ story along, and it certainly gave people waiting impatiently on the third book something to gripe about. But it does have a certain charm and shows a slightly different side of the writer.

The story, more a novel-length vignette if such a thing can exist, follows Auri as she goes about her day-to-day life in the Underthing below the university, preparing for a visitor. The book follows her for several days as she gets things in order, and while she does have adventures, they’re certainly not of the kind that Kvothe is involved in above the ground. Though, as we see early on when she dives for treasures, they can be just as dangerous.
Read more »
Posted by Fred Phillips at 11:26 AM No comments:
Labels: Book reviews, Fantasy, Kingkiller Chronicles, Magic, Patrick Rothfuss 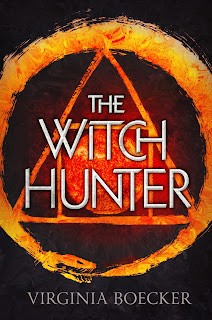 In her debut novel, “The Witch Hunter” ($18, Little, Brown), Virginia Boecker takes us to an alternate version of 16th Century England where magic is very real and practicing it can be hazardous to your health.

Elizabeth Grey is coming of age in a violent occupation. She’s been trained since she was a child for one purpose – to bring witches to justice – and she’s been very good at it. Until recently, that is, when other issues have been occupying her mind.

The tables turn on Elizabeth when she is caught with some forbidden herbs and accused of witchcraft herself. She’s imprisoned and scheduled for execution, but Nicholas Perevil, the country’s most notorious and most wanted wizard, rescues her. He offers her life in return for her help in breaking a curse that’s been placed on him.

She begins her journey as a reluctant savior for a man she’s been taught to hate, but the path she travels will turn the world that she’s known for most of her life upside down.
Read more »
Posted by Fred Phillips at 5:19 PM No comments:
Labels: Alternate History, Book reviews, Fantasy, Historical, Magic, Pirates, Self-published, Virginia Boecker, Witches, YA
Newer Posts Older Posts Home
Subscribe to: Posts (Atom)