Review: "Harry Potter and the Chamber of Secrets" by J.K. Rowling 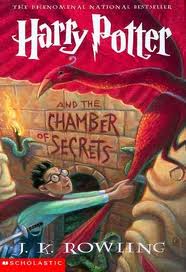 Harry and his friends are back at Hogwarts for their second year. Mysterious voices begin talking to Harry and accidents start befalling some of the students at the school. Harry and his friends turn their eyes on the usual suspects -- Draco Malfoy and Professor Snape. Most of the school on the other hand, suspects Harry -- especially when they learn he can speak Parseltongue, the language of serpents.

After being pleasantly surprised by the first book in this series, I dove right into this volume. Again, I wasn't disappointed. I went cover-to-cover in one sitting and was glad I already had the third book in the series when I finished.

The strength of this book is basically the same as the first -- it's just a great story. It's easy to like Harry and his friends and hope everything turns out all right for them.

Rowling does a great job of putting Harry in exceptionally difficult situations and then brings him out in a fantastic, yet believable way.

Again, though, check your adulthood at the door. If you sit down to these books with the outlook of an adult, you won't enjoy them as much as if you can tap into that kid that's deep down in you.

These are outstanding books. I highly recommend them. 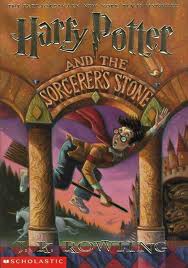 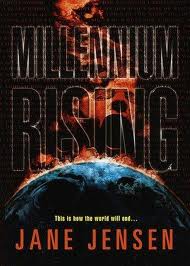 With the Millennium upon us, everyone seems ready to cash in on the uncertainty looming ahead. Books and movies have already started hitting the market, and I’m sure there will be a deluge of apocalyptic material in the coming months.

Looking around the world, some people are storing food and water and preparing for nothing short of Armageddon. Others think there will be only a few minor problems with computer systems that are a little behind the times, and life won’t change that much. I tend to fall in the second category, so I’ve avoided most of the hype.

That being the case, there was just something about the description of Jane Jensen’s "Millennium Rising" on the Del Rey Web site that made me send off that e-mail to be a reader-reviewer. One powerful paragraph: "Sacred texts around the world warn of the terrifying signs and wonders that will foretell the end of the world. For thousands of years, the prophets have always proved false. Until now..."

Jensen handles the subject of Armageddon well, tying the Book of Revelation and the prophecies of Nostradamus and a handful of other prophets, all into a neat and tidy conspiracy worthy of the greatest paranoid in the world.

The book begins with a Catholic priest, Father Michele Deauchez, and a reporter for the New York Times, Simon Hill, witnessing what appear to be miracles in the small village of Santa Pelagia, Mexico. Shortly after the event, those that were there begin to step forward and proclaim themselves prophets of God. They begin to prophesy Armageddon, and when their prophecies begin to come true, followers flock to them. Deauchez has other ideas about the "miracles," though, and pretty soon, so does Hill as they set out to find the truth.

I have to say I was a little disappointed when I figured out what was going on early in the book. I was afraid that letting the reader in on the truth so early would take a little of the drama and suspense out of the later parts of the novel. Happily, I was mistaken as the latter half of the book pulled me into the story.

Initially, I had a little trouble swallowing this massive conspiracy theory, but by the end it was seeming more and more plausible.

In fact, the only problem I really had with the book was that it seemed to end too soon with too many unanswered questions. Deauchez, Hill and the prophets Lamba Rinpoche and Will Cougar are left in a very precarious position, and the world is still in chaos. I think the aftermath of the events in this book is a story worth telling as well. Perhaps we’ll see another volume in the future.

As for this book, the reader may have to put aside a few misgivings and accept a few things that are hard to swallow in the early-going, but that patience will be rewarded in the latter half of the book. It’s a good read, especially if you have an interest in prophecy, the coming millennium or conspiracy theories.