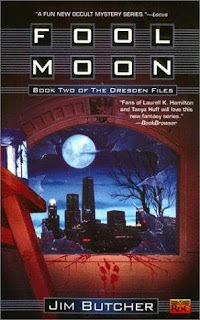 A burgeoning subgenre in the fantasy and horror fields is the supernatural detective novel. Fantastic creatures roam our own world and some of them are not so nice. So who do you call when a magician, vampire or werewolf commits a murder? Well, if it happens in Chicago, you call Harry Dresden, wizard-for-hire.

In "Fool Moon" (ROC), his sophomore effort, Jim Butcher establishes himself among the elite of the supernatural detective subgenre, alongside the pioneers of the field like Laurell K. Hamilton.

Butcher's vision is slightly different from Hamilton's, though. In Hamilton's worlds, creatures like vampires and fairies roam the world freely, granted equal rights by the Supreme Court. Butcher's world is much like our own, and most people would scoff at the mention of magic or werewolves.

Karrin Murphy, head of Chicago's special investigations unit, isn't one of those people. She's seen Dresden in action and worked closely with him. But business has been slow for Dresden since his last cooperative effort with Murphy went bad. He's been lambasted in the press as a charlatan, and Murphy is under an internal affairs investigation for her dealings with him. But when a string of grisly murders occurs around the full moon for two months in a row, Murphy has no choice but to call Dresden in on the case.

With murders around the full moon, bloody pawprints at the scene of the crime, strange bite marks on the victims and a woman who is not human trailing the private eye, it at first seems like a clear-cut case for Dresden. All he has to do is find some evidence to use against the werewolf. But when a cursed man, a group of magical shapeshifters that call themselves the Alphas, a group of people who use magic belts to transform into wolves and a street gang of lycanthropes - people who think they are werewolves - get involved, things get a little more complicated.

The result is an action-packed ride that doesn't let up, as everyone - even Murphy - sets their sights on Dresden.

There's something refreshing about a wizard who chants a spell to the tune of the Peanuts theme song while using a stuffed Snoopy doll to bind a werewolf. Or one who hums bits of "Carmen" while confronting a group of lycanthropes that's likely about to rip him apart. Dresden does both and more in "Fool Moon," while at the same time trading some very unwizardly comic book-style banter with his adversaries.

Unlike most wizards, who take themselves far too seriously, Dresden comes off as more of a regular guy who just happens to have some magical powers. Not only do these things provide a little levity in some tense situations, they also offer a base in reality for readers who are not normally fans of fantasy and horror.

I was a bit disappointed with the tidy, Scooby-Doo style wrap up at the end. There were several interesting problems created during the course of the book - like how the police would deal with a cursed shapeshifter who has committed several vicious murders, but has no control over it. Butcher takes the easy way out on a lot of those problems and ties things up just a bit too neatly.

Still, it doesn't detract much from the book as a whole, which is an entertaining read. With "Fool Moon," Butcher strikes a perfect balance between fantasy, horror and mystery - giving the reader the best of all three worlds.