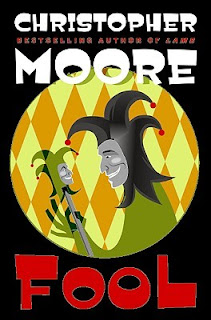 I’ve often regretted that my introduction to Christopher Moore came through his 2002 novel "Lamb." I still consider it one of the funniest books I’ve ever read, and his other books, while all enjoyable, just haven’t stacked up. His latest, "Fool" ($26.99, William Morrow), finally found that spark again.

It seems parodying great literary works may be Moore’s strong point, as this time he takes on Shakespeare’s "King Lear." We get a little background on Lear’s fool early on. Pocket is an orphan, raised by nuns, exiled from the church and saved from a cruel master by Lear after his act causes the king’s youngest daughter Cordelia to speak after years of silence.

As in Shakespeare’s play, Pocket becomes a beloved companion and a bit of a confidante to Lear, having the ability to point out folly and foolishness that would cost the life of any other person at the king’s court. Unlike Shakespeare, the fool of Moore’s book is the true mover and shaker behind the story. After Lear asks the fateful question of his daughters that sets things in motion, Pocket is the one working behind the scenes like an acid-tongued Machiavelli as the king wails and rages at the storm.

Moore plays fast and loose with Shakespeare, history and pretty much everything he touches in "Fool." The story draws influence and pulls quotes from a number of Shakespeare’s plays, and the witches from "Macbeth" are even invited over to play a key role as Moore’s version of the story unfolds.

There are, of course, dalliances, buffoonery and general silliness involved, as you’d expect from Moore. He warns at the opening of the book, "This is a bawdy tale. Herein you will find gratuitous shagging, murder, spanking, maiming, treason, and heretofore unexplored heights of vulgarity and profanity, as well as non-traditional grammar, split infinitives and the odd wank." For the most part, he lives up to that, so, like "Lamb," "Fool" is not a tale for the easily offended.

It’s not an easy thing to turn one of the greatest tragedies ever written into a comedy. Moore succeeds in injecting plenty of humor — albeit usually very black humor — into the story, while still keeping some of its darker and grittier elements.

While most of Moore’s books have been entertaining, he really shines when he takes on the bigger stories. Sure to offend as many people as it entertains, "Fool," like "Lamb" before, stands head and shoulders (or at least coxcomb and bells) above his other works.

A new beginning ... sort of

If you've wandered here in search of my music reviews, I'd like to let you know that I've branched out and created a new site solely dedicated to music. Since the music has always been the biggest draw, I decided to start the second site so those looking for music don't have to wade through my other insane babblings. Basically, it's the same name, same writer, just completely dedicated to music.

If you're one of the chosen few that enjoy my occasional rantings, book reviews and musings on the Saints, you probably don't want to wade through the pages of metal reviews either. Those features will still be found here, and I will continue to update them, though not as frequently probably as the music site. Hope you enjoy both.
Posted by Fred Phillips at 2:26 AM No comments:
Labels: Intro, Random rants 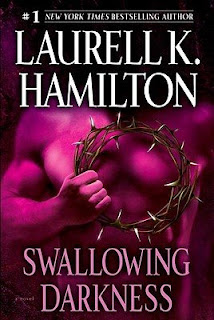 Laurell K. Hamilton’s series about Meredith Gentry, a half-human princess of faerie, started with great promise in her 2000 novel “A Kiss of Shadows.”

Merry was living in Los Angeles, working for a detective agency, when she was called home by her aunt, the queen of the Unseelie Court of the sidhe, and offered the crown of the court if she could produce an heir. That’s when things took a bad turn.

The second book, “A Caress of Twilight,” was entertaining, but not nearly as good as the first. I slogged through as much of the third book as I could, but never finished it. The plot that had so intrigued me in the first book had become a thin excuse to get the characters from one sex scene to the next by the third.

I gave up on the series after that. But on the recommendation of a few people that I trust, I decided to give it another shot with “Swallowing Darkness” ($26, Ballantine), the seventh book in the series.

Mercifully, heirs-- two of them -- are on the way when the book opens, clearing the way for Hamilton to get back to the story. The book opens with Merry in the hospital, recovering after being kidnapped by King Taranis of the Seelie Court of the sidhe and hatching a plan to have him prosecuted by the human authorities rather than having her warriors handle it in the traditional sidhe manner and spark a war between the two courts on American soil -- a war that would violate the treaty with the American government and leave the sidhe exiled from the country.

A visit from her grandmother goes horribly awry, leading Merry to call on the ancient magic of the Wild Hunt to seek her vengeance. Ancient magics, long lost, seem to be popping up all around Merry, and all the various clans and royalty of faerie want their piece of it. All, that is, except her mad cousin Cel, who only wants the crown her aunt promised him before she discovered he was unable to provide a heir and sees Merry as an usurper.

Though I skipped three and a half books in the series, Hamilton does a good job of catching the reader up in the early going, and I don’t feel as though I missed much.
Most of this book is spent in faerie, rather than the human world, dealing with ancient races and magic, which gives it more of a traditional fantasy feel. It unfortunately lacks the courtly intrigue of the early books, as pretty much everyone here has declared their side and the hostilities are open.

Now that the plot has started moving again, it moves at a breathless pace toward the resolution of many of the points raised in the first book, and sees Merry coming fully into her power, restoring the historic magics of the sidhe and uniting at least a few of the fractured factions of faerie.

Though Hamilton now says the story, which began as an 8-book series, may stretch to 15 (rarely a good thing), the fairy-tale like ending of “Swallowing Darkness” at least hints that a chapter of the story is over. The book does, however, bring a welcome return to plot, and here’s hoping the next chapter will follow suit.