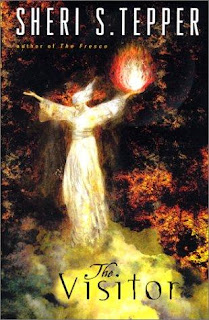 Killer meteors hurtling toward the Earth were big at the theater a few years ago, but with her latest, "The Visitor" (EOS), Sheri S. Tepper puts a new spin on the tale.

In a society not much more advanced than our own, astronomers spot a strange object sailing through space, on a collision course with our own world. Scientific minds prepare for survival, thinking they can preserve the human race. The religious turn to prayer, thinking Armageddon is at hand. They're both wrong.

While the world changes and millions upon millions die in what comes to be known as the Happening, the human race survives - but it's greatly changed.

The result is a future that neither the coldly scientific nor the faithful religious could have predicted. A new mythology is born with tales of rebel angels and a Guardian Council - both of which will soon return to the world. Many have heard the story, but few suspect they're real.

Disme Latimer is a descendant of one of the scientists that sheltered in hopes of preserving humanity. Since her brother and father died, she's lived with a wicked stepsister who takes pleasure in causing her pain and anguish. But her stepsister Rashel has her own secret to keep.

Disme lives in Bastion, a society of the Spared, who believe they are the only true humans. She knows she's different from the others around her, but even she can't guess the destiny that awaits her when the Visitor begins to move from its perch at the top of the world.

"The Visitor" is part "Armageddon"-style sci-fi thriller and part "Cinderella" story. It's a book that merges magic and science effortlessly into a new kind of post-apocalyptic world.

Tepper has created a place where magic and science are almost indistinguishable from each other - and both do exist. A place where concepts from our own world are skewed to fit this new frontier. A place as intriguing as it is horrifying.

The story in "The Visitor" is another incarnation of the age-old science vs. religion argument. The difference is that in Tepper's world, neither side is truly right. The reader is forced to face some facts with a cold, analytical mind, while at the same time taking other facets of the story on faith.

Even though I suspected the true nature of the Visitor, the revelation of the mystery was a bit disappointing. Not because of its identity, but because, after a long and thought-provoking novel, Tepper didn't let the readers draw their own conclusions. Instead, she takes the soap box for a few pages - in the guise of the Visitor, of course - and tells us exactly what we should get out of the book. It's a heavy-handed approach that didn't do much for me.

That being said, it's not enough to ruin the book. The story up to that point and the conflict that follow are more than enough to make up for a little bit of preachiness.

In the end, "The Visitor" is an excellent tale, one of the best post-apocalyptic novels I've ever read. Tepper has created a world of endless possibilities, a world that I wouldn't mind visiting again.
Posted by Fred Phillips at 1:06 PM No comments:
Labels: Aliens, Apocalypse, Book reviews, Magic, Science Fiction, Sheri S. Tepper 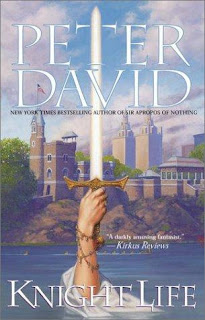 Ever wonder how King Arthur would have done in the Connecticut Yankee's world? Peter David ponders that question in his latest novel "Knight Life" (Ace). The book, originally released 15 years ago in paperback, has been updated and expanded by almost one-third for its hardcover release this month.
After centuries spent in an isolated cave, Arthur and Merlin - now a young boy due to his living backwards in time - emerge in modern-day New York. Seeing the problems in todays society, Arthur decides that the world needs him, and he'll start as mayor of New York.
But Arthur and Merlin aren't the only ones who have survived Camelot. Arthur's half-sister Morgan Le Fay has been watching for their return, and she has a surprise of her own. Their son Mordred isn't dead either, in fact he's a campaign manager for one of Arthur's chief rivals in the election.
Things are going well for the "Once and Future King" when he meets Gwen DeVere Queen, the reincarnated soul of his beloved Guinevere, of course. Despite Merlin's warnings that he's doomed to repeat history, he makes her part of his campaign.

Arthur's simple platform - "Hi, I'm Arthur Penn, and I want to be the next mayor of New York" - and his radical, common-sense views on political issues quickly earn him a following among jaded voters. But Morgan's plotting and a classic betrayal may lay his political career low.

"Knight Life" is a fun spin on the Mark Twain classic. Rather than send a modern-day person to King Arthur's court, David brings Arthur's court to us. The result is a mix of classic Arthurian fiction and a satiric commentary about the nature of today's politics.

The story is rife with intrigue, mirroring the Arthurian legends on several key points. At the same time, it pokes fun at double-talking politicians. A perfect example is the mayoral debate in the book. When Arthur is given his first chance at a rebuttal, he sputters, "but they didn't answer the question." It's something all of us have said to the TV screen after watching a politician evade an issue.

The entire tale is subtly humorous, but there are a few true laugh out loud moments as well. For example, Arthur's initial meeting with Gwen - in full plate armor - leads her to classify him as a weirdo. That meeting also sends him to an upscale clothiers shop - still in full armor - which causes quite a stir among the workers.

In "Knight Life," David manages to strike a balance that can be tough for humor writers. He's loaded the story with laughs, but doesn't take the easy way out and turn it into a slapstick tale. Instead, he tells an engaging story and manages to slip in a few commentaries on the real world as well. If you didn't catch "Knight Life" the first time around, there's no time like the present.
Posted by Fred Phillips at 1:12 PM No comments:
Labels: Book reviews, Comedy, Fantasy, King Arthur, Merlin, Peter David, Urban Fantasy
Newer Posts Older Posts Home
Subscribe to: Posts (Atom)