Review: "From the Dust Returned" by Ray Bradbury 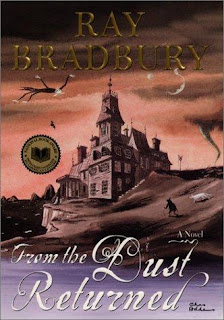 Ask speculative fiction fans to name the best authors of the 20th century, and Ray Bradbury would probably rank high on almost every one. In a career that's spanned almost 60 years, Bradbury has shown us visions of the future and sent shivers down our spines. In the process he's also created some classic stories like "Something Wicked This Way Comes" and "Fahrenheit 451," which in my opinion should be required reading in school.

Now Bradbury enters the 21st century with his newest novel "From the Dust Returned" (William Morrow). It's an unusual book in that it took 55 years to complete. The book meshes together slight revisions of several popular short stories, along with some new tales and interesting interludes.

"From the Dust Returned" chronicles Bradbury's popular Elliot family, which includes witches, vampires, magicians, winged men and all sorts of curious characters. The story is told by Timothy, a seemingly "normal" child who was left on the doorstep with a note that simply said "historian."

Through Timothy, we meet some of the more interesting members of the family. The fabulous winged Uncle Einar who, after losing his night vision in an accident, hits upon a unique solution that allows him to fly during the day without drawing undue attention to himself. Cecy the Dreamer who lays in the attic, but travels far and wide through the minds of other people and animals. A Thousand Times Great Grand-Mere, the daughter of a pharoah, and her husband Grand-Pere, who still feels frisky at the age of 4,000.

Even though he's often referred to as a science fiction writer, the weird is really Bradbury's element. While I appreciate his sci-fi tales, I've always felt that he was at his best when exploring the strange and unknown in tales like those in his short story collection "The October Country."

In "From the Dust Returned," Bradbury hits on all cylinders. He draws every emotion from the reader, from amazement to laughter to horror. It's a book with a sense of wonder that will appeal to children and a depth that adults will appreciate. Since most of the chapters can be read separately as short stories, it may even be a good book to read with your children.

In the afterword, Bradbury talks about his relationship with the late cartoonist Charles Addams - whose cover art fits the book perfectly. After watching "The Addams Family" when I was young and reading "From the Dust Returned," it seems to me that they influenced each other heavily. In a lot of ways, the Elliot family resembles the cartoonists' famous "Addams Family."

Bradbury says he and Addams often talked about doing a book like this, but never got around to it. I think Addams would be proud of "From the Dust Returned." 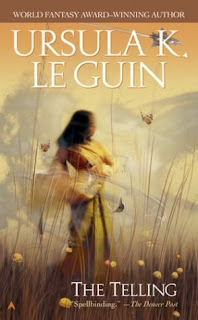 When it comes to literary science fiction, there are few names more recognizable than Ursula K. Le Guin. The award-winning, critically-acclaimed author of "The Left Hand of Darkness" and the Earthsea novels is one of only a handful of science fiction writers to actually make their way into literature classes.

My introduction to Le Guin came in a college textbook, which featured her short story "The Ones Who Walk Away From Omelas." I quickly moved on to the Earthsea books, which I enjoyed immensely.

Now Le Guin has returned with "The Telling," out this month in trade paperback from Ace. It's the first book in her Hainish cycle in over 25 years.

Historian Sutty Dass is sent to the planet Aka to study its culture. Unfortunately, in the time it has taken her to travel the light years to the planet, its society has changed. Aka is now ruled by the Corporation, a capitalist government based on principles picked up from reports of Earth.

The ancient culture of Aka has been pinned under the bootheel of the Corporation, which encourages - sometimes violently - everyone to be good consumer-producers. The old ways and stories have disappeared in the cities. Anyone caught practicing those customs is imprisoned, and if they survive the punishment, re-educated.

So far Sutty has been sheltered from the real Aka, fed the same propaganda over and over from Officials. But now she's been given a chance to travel outside the city, where she discovers the true nature of the people. But how can she report it without drawing the wrath of the Corporation down on the people who have trusted her with the Telling?

I have to admit that I haven't read much of the Hainish cycle, but that hardly mattered. From the first pages, the book began to draw me into this new world, setting up a web of mystery about the origins of the people of Aka before the rise of the Corporation.

I was a little disappointed in the follow-through, though. Somewhere near the middle, "The Telling" gets bogged down with a dump of information about the Aka. Rather than working it into the story, it seems to be presented more like Sutty's scientific report. Fortunately, Le Guin recovers for a solid ending.

More importantly, though, are the thoughts the book produced in me. Somewhere between classics like Ray Bradbury's "Fahrenheit 451" and George Orwell's "1984," the novel made me think about some of our technological advances. When you take a look at the lack of privacy under the Corporation, you begin to wonder a little about satellite systems that can pinpoint your vehicle anywhere in the country and other things that many people consider "conveniences."

"The Telling" also has some connections with unfortunate recent events, as Sutty's life has been altered by the terrorist attacks of an extremist religious group back on Earth. Le Guin doesn't dwell on these aspects of the book - which was originally published in hardcover a year ago - but some scenes are unsettlingly similar to the events of Sept. 11.

"The Telling" is a science fiction story, but like "Fahrenheit 451" and "1984" it also contains a cautionary tale. Perhaps we should listen.