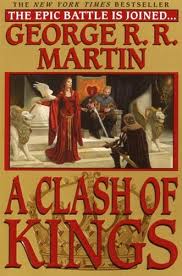 To use the vernacular, at the start of the second book in Martin's Song of Ice and Fire Series, all hell is breaking loose. Four different men have proclaimed themselves the rightful king, and everyone is at war with everyone else. To add to the mayhem, the long winter is near and a new threat is forming in the wilds on the other side of the wall.

I seem to be developing a pattern. I dive into the first book of a series and love it, then when the second book gets here, I can't muster as much enthusiasm. I think it likely has to do with the fear of another out-of-control Robert Jordan-style neverending saga. Whatever the reason, this book didn't keep me turning the pages like the first did, but it didn't lose me either.

It's really been too long since I read this to give an in-depth review, so instead I'll just offer a few general thoughts. There's still plenty of action, intrigue and betrayal, and it's a worthy successor to the first novel. I was a little disappointed at the end of "A Game of Thrones" when a lot of things were left hanging. This book was the same, resolving a few things, but leaving much more open for the next volume.

All in all, this was an enjoyable book. The jury's still out on the series as a whole, though. It can go very well or very badly from this point. I'm just hoping there's an end in sight.