Review: "Of Blood and Honey" by Stina Leicht 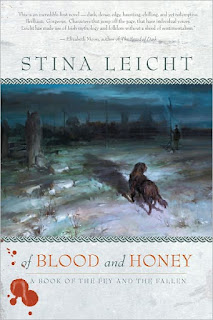 I’ve had pretty good luck with debut novels of late, but I leave Stina Leicht’s “Of Blood and Honey” ($14.99, Night Shade Books) with mixed feelings.

The story focuses on Liam Kelly, a young man growing up in the turmoil of the 1970s in Ireland. Liam is a Puca, a shapeshifter of Irish legend, only he doesn’t know it. He’s grown up with a stepfather and other members of his family who don’t really like him. He’s been told his father was Protestant, while is family is devoutly Catholic, and he assumes that’s the reason. Other than his mother, the only two people who really seem to care about Liam are a local priest, Father Murray, and a neighborhood girl named Mary Kate. Both, though, will end up getting him in trouble.

Father Murray carries secrets that are important to Liam’s very survival. Mary Kate comes from a staunchly Republican family and is a regular at demonstrations and protests. At these demonstrations, Liam is arrested by British troops and imprisoned without trial twice for no greater crime than being in the wrong place at the wrong time. During his first stint in prison, he discovers that there’s something lurking within him that’s not quite human. During the second, his non-political outlook on life changes and he volunteers for the IRA.