If you’re one of the three people who visits this site with any regularity, you’ve probably noticed a lack of book reviews recently. Sure, the three-year-old running around like crazy and that gorgeous new Music Man Axis that I got for Christmas have taken away from my reading time, but the honest truth is, there’s just not a lot in my to-read stack right now that’s exciting me.

It’s gotten to the point that, when choosing a book earlier this week, I dipped back to pick up Stephen King’s "Song of Susannah." (Yeah, after griping about him not finishing the series for years, it’s taken me four to get to the last two books.)

Don’t get me wrong, I’m not offended by this in any way. I was a big fan of Laurell K. Hamilton until her "plots," and I use the term loosely these days, became an excuse to get her characters from one sex scene to the next. I enjoy Charlaine Harris’ vampire stories that take place in my back yard, and Jim Butcher has yet to disappoint me with his pretty much sex-free tales of Chicago wizard Harry Dresden. But the truth is, I groan now every time I pull one of those books out of the envelope (enough, already), and unless it’s by an established author that I know I like, it’s probably destined for the donation box.

I’m so sick of the subgenre that I even stopped work on a book of my own in the genre (no vampires, period) despite the fact that I quite like the idea of it. There’s just too much of it out there right now, and it’s gotten stale — really, really stale.

So, here’s where my three readers come in. I’ve got the King books to keep me company until Greg Keyes’ latest book arrives later this month and Jim Butcher’s comes in early April. Both of those go directly to the top of the stack. George R.R. Martin’s latest is coming in September (we think), but between those, I need some suggestions. So hit me with your best ideas. Give me suggestions for a book that’s exciting, a book that has some freshness, a book that will inspire. Whether it’s a book from your favorite author or a book of your own (know in advance, though, that if you send me your own, I will be completely honest, love it or hate it.) Leave it as a comment for the other two readers to share or send it to me via e-mail. If it sounds good to me, I’ll check it out.
Posted by Fred Phillips at 7:30 PM 2 comments:
Labels: Random rants 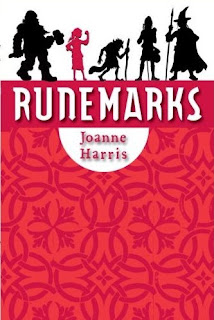 Maddy is an outcast in her village of Malbry, born with a runemark on her hand — or a “ruin-mark” as its known to the people who have renounced the old Norse gods and now follow a god known as The Nameless. Magic is strictly forbidden, and those born with the mark of it are shunned at best, and in some cases, executed at birth.

The girl spends her days cleaning the Seven Sleepers Inn in the village and daydreaming about the return of the mysterious traveler known as One-Eye. He doesn’t see Maddy as an outcast. Rather, he views the runemark as a blessing and has been secretly teaching her the magic that is her birthright during his visits over the last seven years.

Now the world is changing, and when One-Eye returns, he asks much more of Maddy than their regular lessons. He sends her into the goblin-ridden underworld of Red Horse Hill, just outside the village, to receive a magical ancient artifact known as the Whisperer. Maddy is armed with little more than simple rune spells and a warning to stay away from a former associate of One-Eye, a trickster and the reason that One-Eye himself can’t retrieve the item.

The journey will bring Maddy all the way to the borders of Chaos and beyond.
Needless to say there are quite a few twists and turns, revelations and surprises in store through the course of the story. I won’t give them away any more than those with a little knowledge can already guess from the setup above. It will leave the reader with a slightly different impression of the Norse pantheon.

“Runemarks” will certainly be a challenging book for the young readers that it’s aimed at, not only because of its heft, but also because of the content. While it is an engaging adventure story, it also tackles some serious moral questions and is thought-provoking even for adult readers. Fantasy fans of any age should be able to appreciate it.