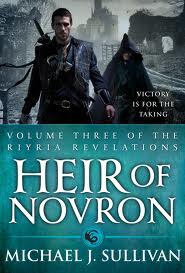 When I began “Heir of Novron” ($14.99, Orbit), the final volume of Michael J. Sullivan’s Riyria Revelations more than a month ago, I expected to have a review up in about a week. Life, though, often intervenes. Let it be known that the delay is no fault of the author, who has delivered another rousing adventure tale to end this enjoyable series.

Treachery is the name of the game in the first book, “Wintertide.” Princess Arista of Melengar travels to Aquesta, the seat of the new empire, in an attempt to free the Nationalist leader Degan Gaunt, also believed to be the legendary Heir of Novron, from his imprisonment and impending execution. Instead, she ends up as part of the entertainment at the upcoming Wintertide celebration, to be executed as the Witch of Melengar alongside Gaunt. The empress Modina, really a village girl named Thrace that church officials have set up as a puppet leader, is also to be married to a top church official. An accident is sure to follow the brief wedding. But the empress is more aware than they think and may have some surprises up her sleeve.