What if you followed the wrong person through the wrong door and found yourself at the center of something that could shake the foundations of the world?

Toby, disillusioned and wondering what's happened to his life, falls madly in love with a beautiful female passenger who rides the train on his regular commute to work. One rainy evening, he decides to follow her, hoping he'll have a chance to meet her on the walk home. But when she opens a door in a wall where there wasn't one before, he gets more than he bargained for. He finds himself in the world of Mysterie, the world where magic has retired as science pushed it out of our own world.

Surrounded by gods, fallen angels and magical creatures of all sorts, Toby finds that he is one of the most important figures in Mysterie. He's a focal point, which means that soon he will make a decision that affects the fate of both Mysterie and Veritie, our own world.

Nicholas Hob, the Serpent's Son, is up to something and it's up to Toby and his mystery lady Gayle - who turns out to be much more than she appears - to stop him. They recruit the aid of a distant descendant of the Norse god Thor. Johnny Thunders is a leather clad godling who "looked less like a Norse deity and more like the god of Harley-Davidson worshipers, the kind of people who probably recited braking distances under a full moon and sacrificed a Kawasaki when they needed to beg a favor." Still, they'll need his help and more to stop the Hob and his father, the Serpent in the Sun, from bringing ruin to both worlds.

One thing that put this book over the top for me was that I identified immediately - and far too closely - with Toby. He's just turned 30 and is looking around at his life and wondering where those three decades have gone and what happened to his dreams and plans. Hmm ... sounds familiar somehow.

Aside from my commiseration with the main character, Green has presented a fantastic tale that weaves together ancient mythology and pop culture. It reminds me a lot of Neil Gaiman's fantastic "American Gods," but it's a little more fast-paced and intense.

Green has packed Mysterie with a cast of colorful characters who - aside from saving the two worlds - also have some personal issues to deal with. That added touch makes them more real and believable.

"Drinking Midnight Wine" has a little of everything - mystery, fantasy, horror, suspense and a wicked sense of humor. Green throws it all in a blender and what comes out is a very satisfying story. And besides, where else are you going to see a thunder god in a plaid robe and pink bunny slippers? 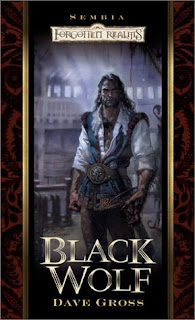 It's been a long time since I've been excited about the novels set in the various Dungeons and Dragons worlds. But things are changing.
A big part of that change is the "Sembia" series, a group of books aimed at newcomers to the Forgotten Realms. The "Sembia" series is a group of self-contained stories that require little or no background knowledge of the massive collection of Forgotten Realms novels that have come before.
The latest in the collection is "Black Wolf" by Dave Gross (Wizards of the Coast). The novel details the trials of Talbot Uskevren, a young Sembian noble with a dark secret.
During a hunting trip, Talbot and his party were pursued by a group of werewolves. Tal escaped, but not unscathed. Now, his body heeds the call of the moon, and he must lock himself in a cage to keep from harming anyone. Things get worse when Rusk, leader of the werewolf pack, arrives in Sembia. He's convinced that Tal is the legendary Black Wolf, and intends to control him.

Rusk forms a shaky alliance with the chief rival of the Uskevrens, an odd pair of brothers from the Malveen family - Stannis, a vampire, and Radu, a seemingly unbeatable warrior. Caught between the monster growing inside him, the pack, the Malveens and his own father's wrath at his irresponsibility, Tal turns to a mysterious cleric of Selune and his old friend Chaney to help him control the beast.

I'm a sucker for a good wolf story - even if it is of the "were" kind - and "Black Wolf" certainly fits the bill. As you'd expect from a Forgotten Realms novel, it's fast-paced with plenty of action and adventure.
But there's also a deeper bit of character development, especially with the young servant Darrow - who gets shuffled between Radu, Stannis and Rusk. Despite the fact that Tal's story is fascinating, it's really Darrow that steals the show, winning the sympathy and goodwill of the reader.
Gross also has a deft hand with combat scenes, both human and wolf. His touch and attention to detail remind me a great deal of R.A. Salvatore, the master of the fight scene.
"Black Wolf" is an entertaining novel that can be enjoyed by anyone. There are a few sprinkled references to characters, places and events that longtime Forgotten Realms readers will enjoy, but as intended, no prior knowledge is needed.
The book also marks another step in the right direction for Wizards of the Coast, which has big things happening in most of the worlds of Dungeons and Dragons. In Forgotten Realms, there's the "Sembia" series and an upcoming series on the drow that looks very promising. In the classic Greyhawk setting, there's a series of novels based on classic gaming modules. And the luminaries of the Dragonlance world, Margaret Weis and Tracy Hickman, are shaking things up on Krynn.
Posted by Fred Phillips at 2:30 PM No comments:
Labels: Book reviews, Dave Gross, Fantasy, Forgotten Realms, Vampires, Weres 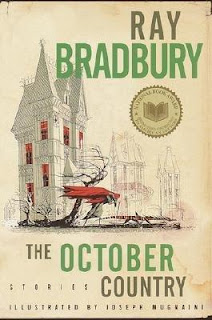 When I think of Ray Bradbury, there's always one book that comes immediately to mind.

For most Bradbury fans it might be "Fahrenheit 451" or "Something Wicked This Way Comes." But for me, that one book is "The October Country," recently re-issued by Del Rey in trade paperback format with all of the original artwork.

I believe "Fahrenheit 451" may be one of the most important books of the last century, and there's no denying that "Something Wicked" is a wonderful tale. But if you really want to experience Bradbury at his best, look no farther than the collection of stories in this book.

The strange and bizarre is where Bradbury excels, and "The October Country" contains some of his best short stories.

The tales here range from the creepiness of "The Jar" to the uplifting "Uncle Einar" to the haunting "The Lake" to the just plain strange "The Watchful Poker Chip of H. Matisse." But the stories all have a few things in common. They're all incredibly well written, and they all have a statement to make about the human condition.

It's a shame that Bradbury - like many other good authors who choose to write speculative fiction - is so often pigeonholed into the fantasy/sci fi/horror "ghetto." He truly is one of the best writers of the 20th century.

Just read a story like "The Dwarf," which really has no fantastic elements at all. Instead, it's a tale of human cruelty and its results. A story in which the "monster," much like in the real world, is just an ordinary Joe.

Likewise with the bizarre "Watchful Poker Chip of H. Matisse." The story isn't strange because of some fantastic ghost or monster, but rather because of the extreme lengths the main character goes to remain the center of attention.

Whether it's the crowd mentality, the desire to be popular or the longing for something that can't be had, Bradbury is an astute observer of human nature. He puts those observations to good, and often disturbing, use in "The October Country."

Though his output may have slowed in recent years, Bradbury's older stories still stand the test of time. Most of these tales were written in the 1940s and '50s, and they're just as entertaining and thought-provoking in 2002.

If you're looking for an introduction to Bradbury, "The October Country" is an excellent place to start. If you're a fan of good stories with a bit of weirdness, I'm sure it won't be where you stop.