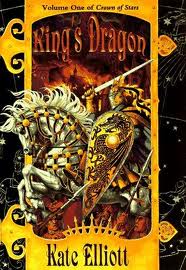 This is an intriguing start to a new series.

I bought this book on the recommendation of another writer, Holly Lisle. It proved to be a good recommendation, and a good purchase.

Elliot introduces us to two strong central characters. Alain is a bastard, promised to the church, but given a vision by the Lady of Battles. He's unsure of his heritage and finds that he may be the son of a count or the son of an elven lord and a whore. Liath has spent her whole life running from an unknown enemy, until her father dies and she is sold into slavery to cover his debts. Bought by Hugh, a clergyman who wants her secrets of magic, she is eventually freed to become one of the King's Eagles, elite messengers. Still she spends the entire novel looking over her shoulder, expecting Hugh to appear around every corner, as does the reader.

Her secondary characters are not cardboard cut-outs either. Although we don't get to know them as well as Liath and Alain, King Henry, the bastard prince Sanglant, Liath's friend Hanna, Rosvita and Frater Agius are all well-developed characters the reader can sympathize with. Also, good attention is given to the layout of society and the magical systems of Elliot's world.

This is the first book I've read by Kate Elliot, and overall I was very impressed. I can't wait to read more.