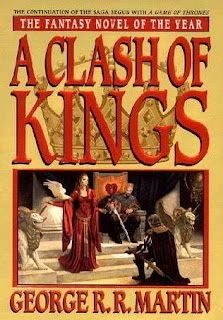 In general, books that have the audacity to pronounce themselves "The Fantasy Novel of the Year" on the cover, fall far short of that lofty title. Occasionally, there are exceptions, though. One such came a few years ago, George R.R. Martin's "A Game of Thrones," the debut novel in his "Song of Ice and Fire" series.

At first I scoffed at the title, but Martin's work quickly convinced me.

The book introduced us to a land in turmoil. The ruler of the Seven Kingdoms has been slain and seemingly all of the royal families have a connection to the throne - and each one intends to stake its claim, often brutally. It's a world descending into chaos, with the ominous and ever-present threat in the motto of the Stark family - "Winter is coming." Indeed, a bleak and icy winter from the looks of things.

The two successive volumes, "A Clash of Kings" and the latest, "A Storm of Swords" ($7.99, Bantam Spectra) have built on that story, adding layers of intrigue, action and suspense.

Of the three ambitious, sweeping fantasy epics that came out of the 1990s - Robert Jordan's "Wheel of Time," Terry Goodkind's "Sword of Truth" and "A Song of Ice and Fire" - only Martin's continues to achieve the same quality found in the first installment.

Jordan's story has gotten bogged down in near endless subplots that have made the past few volumes practically unreadable. Goodkind's series seems to have lost steam, with many of the story lines seeming contrived just to keep the tale of Richard and Kahlan alive. With his series, Martin has managed to avoid those pitfalls.

Martin has kept a firm focus on the primary storyline of his series. While his story is just as complex as Jordan's, with almost as many subplots, Martin weaves them into a seamless whole that advances the main story at all times.

Though Martin does a lot of head-hopping, dropping in regularly on the numerous characters of the books, he also manages to keep the flow. The drastic shifts are not jarring to the reader, but rather segue smoothly into each other.

The books feature powerful characters - both the kind you want to cheer for and the kind you love to hate. But they're also not all cut-and-dried, good or evil. The shades of gray that exist in real-life are very apparent in Martin's work, and his world is much richer for it.

With any luck, the fourth volume of the series, "A Feast for Crows" will be out in hardcover before the end of the year, but nothing is guaranteed, as Martin is still writing it. As anxious as I am to get my hands on it, I hope he takes his time. I'll wait a few extra months for continued quality. 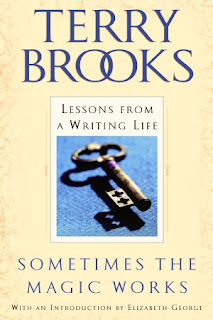 Terry Brooks knows a little something about magic. His "Shannara" series has introduced millions of readers to fantasy fiction. Now, in "Sometimes the Magic Works: Lessons from a Writing Life" ($22.95, Del Rey), Brooks attempts to share the knowledge gained from his success with other would-be writers.

Much like Stephen King's excellent "On Writing" of a couple of years ago, Brooks' book looks at publishing through his own experiences. He illustrates some of the pitfalls and pratfalls of the writing life, and through those stories imparts wisdom to those who hope to follow in his footsteps.

Brooks begins by offering a moving tribute to the people who gave a young writer of Tolkienesque fiction a chance, one of fantasy's most influential couples, Lester and Judi Del Rey. Without the Del Reys, as Brooks points out, there may not be a market for fantasy fiction today.

From there, Brooks covers everything from the incredible success of his first book "The Sword of Shannara," which was the first work of fiction to top the New York Times best-seller list, to the disappointing sales of his attempts to break out of the "Shannara" world 20 years later. He shows aspiring writers that even the most successful fall down sometimes.

One of the most interesting stories in the book deals with his work on movie adaptations. Brooks recounts a nightmarish experience while writing the adaptation of "Hook," in which he was not allowed to see sets, costumes or even talk to key figures involved in the film. He tells of major rewrites as the script of the movie seemed to change on a whim and vowing to never again write a movie adaptation.

Then, of course, came the call from George Lucas, who wanted Brooks to write the novelizaton of "Episode I: The Phantom Menace." Unlike the experience with the former film, Lucas welcomed Brooks into the inner workings of the movie, and even allowed him to change things and write scenes that didn't appear in the big screen version.

Brooks dispels the myths of glamour and fame that some people have about writers when he speaks of book signings where no one shows up. He also tackles the belief that once you write a best-seller, you're set in the publishing world when he talks about having to throw out 375 pages of his second novel and start over from scratch.

Actually, the only place the book gets bogged down is when Brooks begins to discuss tips and techniques. He offers some good advice for aspiring authors, but those two chapters seem to really interrupt the flow of the book.

Besides, the real learning in this book comes not from rote recital of technique, but from watching the progression of Brooks' life. The outlining and characterization is not as important as learning that even a perennial best-seller like Brooks still has frustrations, disappointments and challenges.

In the end, Brooks succinctly captures the spirit of the entire book in two pages. Really, in one line: "If you don't think there is magic in writing, you probably won't write anything magical."

Ultimately, though, the true test of any book on writing is whether or not it inspires. In that, Brooks' book passes with flying colors. In this volume, Brooks' deep love of writing is apparent, as is his appreciation of the talents and success he's been given. That spirit is infectious and should drive any young writer back to the keyboard.