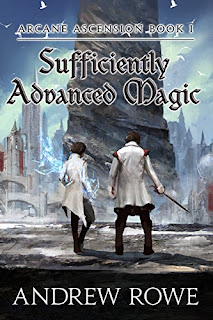 The early going of Andrew Rowe’s gaming-inspired “Sufficiently Advanced Magic” ($3.99 digital, self-published) left me not quite sure what to expect, but I ended up with a very pleasant surprise and a great read.

The story, which finished second in this year's Self-Published Fantasy Blog Off, follows Corin Cadence, who is set to enter the Serpent Spire for his judgment. If he’s successful, he’ll receive his attunement and know where his powers lie. If he’s not, well, he’s not likely to return. Corin comes from a powerful family with a demanding father, so expectations are high.

He has his own plans for the Spire, though. Corin’s older brother, Tristan, is one of the ones who didn’t return, and he intends to become powerful enough to climb the Spire, find his brother and bring him back.

Corin’s judgment doesn’t go quite as planned, though, landing him in a bad position both with his family and a visage of the Goddess. He'll need some help to unravel the tangled mess his life has become.
Read more »
Posted by Fred Phillips at 11:53 AM No comments:
Labels: Andrew Rowe, Arcane Ascension, Book reviews, Fantasy, Magic, Self-published, SPFBO 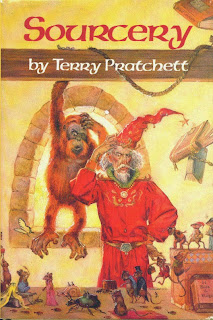 During my college years, I was a regular at several local used book stores. I didn’t have the money for new books, but I could drop a dollar or two on a used one. Most of the stores around here gave you credit for the type of book you traded – fantasy/SF could only be traded for fantasy/SF, for example – but then I found one that traded for anything. I collected boxes of romance novels that my older female relatives had laying around, westerns from a grandfather and anything else that I could find and built a huge pile of credit there.
Read more »
Posted by Fred Phillips at 10:40 AM No comments:
Labels: Comedy, Death, Discworld, Fantasy, Magic, Memory Lane, Terry Pratchett
Newer Posts Older Posts Home
Subscribe to: Posts (Atom)