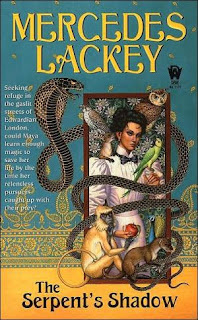 Mercedes Lackey is one of the most respected names in fantasy fiction, but she hasn't always been a favorite of mine. In fact, Lackey has always been hit-and-miss with me. Some of her stories have been grand tales with likeable characters and fabulous settings, while others have just seemed to fall flat, pale imitations of her better works.

Lackey's latest, "The Serpent's Shadow" (DAW), is a slight departure from her usual fare. The multi-layered tale is set in 19th-century London and deals with very real issues as well as fantastic ones.

Maya Witherspoon is the daughter of an English doctor and a Brahmin lady, who - following the mysterious deaths of her parents - has fled to London to pursue her own career as a physician. In London, she is subjected to a double-dose of prejudice because of her gender as well as her mixed Indian-English heritage.

Maya doesn't let the racism and sexism of the time bar her from pursuing her goals. Instead, she goes to the toughest doctor in London to seek her certification, so no one can doubt her credentials. But someone besides the medical community has taken an interest in her.

The elemental masters who control magic in England have taken notice of her strange magical wards, and send one of their own, Peter Scott, to investigate her. After meeting Maya, Peter is convinced that she has the ability to become an Earth Master, an area in which the white lodge is severely lacking. He tries to convince others in the lodge that Maya should be trained, but unfortunately, many of them hold the same prejudices.

Scott takes it upon himself and his "twin" in the lodge, Lord Peter Almsley, to train Maya as much as possible in her abilities. But now another threat has surfaced. A dark and mysterious magic has found its way into the city. Shivani, a follower of Kali, has unleashed the Shadow Serpent on an unsuspecting London both to seek revenge on the English and to settle some unfinished business with her niece, Maya.

"The Serpent's Shadow" is really three stories rolled into one.

First there's the mainstream story of Maya's struggles in the medical field, as she tries to break into a male-dominated profession and bring some much needed compassion to medicine. Maya treats patients that no one else will see and is often derided for her actions - such as trying to save limbs that others would amputate or attempting to remove an inflamed appendix from a woman who is seven months pregnant without harming the child. Along the way she makes enemies who could easily end her career.

Then there's the story of Maya's burgeoning magical ability and her relationship with Peter Scott who is trying to put her on the path to becoming an Earth Master. Here she faces some of the same challenges as in her medical career - men who don't want to see women as their equals. The difference here is that her enemies could end much more than her career.

Finally, there's Shivani, who is obsessed with vengeance on the English for their trespasses in India. Her dark arts are responsible for the death of Maya's parents, and she's followed Maya to London to finish the job. When the white lodge bungles its protections against Shivani's magic, it's up to Maya and Peter to deal with her. But Maya discovers she has some magical help of her own. The "pets" that she inherited from her mother are much more than they appear.

Each of the three stories would be intriguing on its own, but Lackey deftly weaves them into a complex and very satisfying novel. This easily ranks as one of her best efforts. 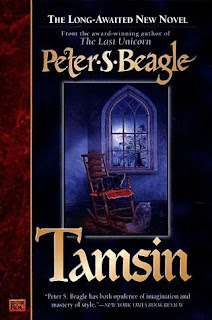 There are good ghost stories, and then there are good stories that happen to have a ghost. In "Tamsin" (ROC), Peter S. Beagle has managed to give the reader a little bit of both.

The book begins with the tale of a 13-year-old girl, Jennifer Gluckstein, who is displaced from her home in New York after her mother marries an Englishman. She's moved into the English countryside, on a farm in Dorset. The first 100 pages of the book take an in-depth look at her adjustment to this new life and her obstinate refusal to be happy there. During this time, the ghosts are only hinted at, but the story line still manages to hook the reader.

Even when Tamsin Willoughby appears in the story, it still doesn't turn into the traditional sort of ghost story. Instead, we watch as Jenny and Tamsin develop a friendship, and Jenny tries to puzzle out the mystery of Tamsin's life.

Tamsin was the daughter of a farmer named Roger Willoughby who worked the farm during Judge George Jeffreys' Bloody Assizes in the wake of the Duke of Monmouth's Rebellion. Jeffreys took a liking to the girl and was infuriated when she didn't return his affections, instead bestowing them on a musician who played for her while a portrait was painted.

The final third of the book finally introduces the traditional angle, when Jeffreys arrives at the farm to claim what he thinks is rightfully his - Tamsin.

The historical aspect of the book fascinated me, sending me to the Internet to research Judge Jeffreys and the Bloody Assizes. What I found indicates that Beagle's portrayal of him is likely fairly accurate. Though sources offer conflicting reports of how many men Jeffreys hanged for treason - varying from less than 200 to almost 500 - all agree that he was known for his cruelty. The self-righteous apparition we see in "Tamsin" seems to be in line with that.

The book is written from the point of view of a 19-year-old Jenny Gluckstein, looking back at the happenings as she made the transition to life in the English countryside. It's written in a chatty, conversational style that makes it seem more like a diary. At first, I didn't like the approach, but as the story played out I found that it made it seem more real. The diary style gave me the impression that Jenny was a real person, telling a real story.

We can feel the fascination that Jenny felt as Tamsin introduced her to a whole new world, filled with wondrous creatures - mischievous boggarts seeking to make a deal with the new owners of the home; the shape-shifting Pooka who can never be trusted; the sage billy-blind that always offers the right advice at the wrong time; the mysterious Oakmen who lurk in the tangled forest; and, of course, the fury of the Wild Hunt which soars through the skies of the English countryside. The style of the story - told in real words that could actually belong to a 19-year-old - makes it easy to believe these things actually exist in our world, below our level of consciousness.

While "Tamsin" is a story of the supernatural, it's not a white-knuckled, edge-of-your-seat page-turner. Instead, it's more like a meandering stroll through a haunted wood that contains spirits both fair and foul. But that only serves to make the story more effective.

With "Tamsin," Beagle shows again why he is one of the premier storytellers in fantasy or any other genre.