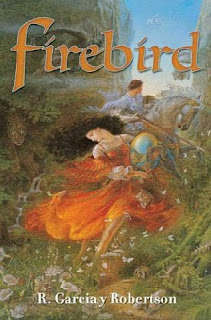 It takes a little audacity to open your novel with the words "once upon a time." It takes even more to close them with another very familiar phrase, which I won't give away here. Fortunately, R. Garcia y Robertson's "Firebird" ($24.95, Tor) lives up to the opening line.
Given to the Bone Witch at a young age, Aria has grown up knowing very little about who she is, but she does have some vivid fantasies. So far, she's lived a simple life, but that changes when, while out gathering fungus, she runs into a wounded knight riding away from the burning city of Byeli Zamak. When she offers him aid, her life changes forever, as she's swept up in an adventure that takes her far away from the simple woods life she's known.
It's hard to offer a synopsis for "Firebird" because Garcia y Robertson leads the reader through so many deft twists and turns of the story that I don't want to give anything away. The plot involves returning a firebird's egg to its nest atop a mountain but there's much more to it. There's a lot of adventure packed into the 320 pages of this tale, and it happens fast and furious.

The story itself is an interesting mix. It's part fairy tale, part alternate history and part bawdy romance. While the overall feel of the book is that of a fairy tale, it's certainly an adult fairy tale. It does have a few raunchy moments and some very dark moments.

At times, perhaps, Garcia y Robertson's fixation on the romantic dalliances of his characters distracts from the story at hand. Some seem a bit unnecessary, but they don't prove too distracting for what is a very good story.

The world of "Firebird" is also interesting, set largely in a slightly modified version of medieval Russia known as Markovy that mixes in magic and mythical creatures. It calls upon legends and themes that fantasy often ignores.

While "Firebird" was my introduction to Garcia y Robertson's work, it certainly makes me want to revisit some of his previous books. It's an engaging read with a sense of wonder and imagination that has by and large been lost in the genre.