Review: "Blue Plague: The Fall" by Thomas A. Watson 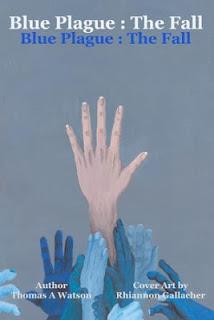 I always dread when someone asks me to review a self-published book, and in most cases, I decline. It’s nothing against that particular work. It’s just the personal history I have with them as a former “professional” reviewer that used to get several a week. I’m sure there are fantastic self-pubbed books out there  – better than anything coming out of the majors – but the vast majority that crossed my desk were horrible.

The book focuses on an interesting family, actually two families who have melded into one on a communal farm in northern Louisiana. They spend most of their extra time and money making their farm self-sufficient, training and stocking up on weapons, supplies and other things that they might need in case of some kind of government shutdown – or, perhaps, the zombie apocalypse. The second is probably something the family would have joked about until a virus that begins in the Congo makes its way around the world and to the United States via a few aid volunteers who escape the country shortly before it is shut down.