Review: "The Eyes of God" by John Marco 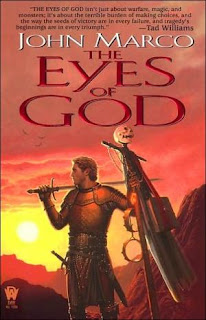 Though he's got at least three other books to his credit, I'd never read John Marco before I picked up "The Eyes of God" (DAW). Now, I may have to check out some of those earlier stories.

This hefty book starts out with a very Arthurian tone. In Liira, a new king has come to power - Akeela the Good he's called. He's a well-loved ruler, kind and generous with a desire to bring knowledge to the masses. Among his first official acts is to create peace with his country's long-time enemy, Reec. He and his champion, Lukien, the Bronze Knight, bring gifts to King Karis of Reec, but he has a gift of his own. He offers Akeela the hand of his daughter Cassandra to seal the peace.

Entranced by the princess' beauty, Akeela agrees to the marriage. But Lukien has also fallen under Cassandra's spell. The results are predictable to anyone familiar with the Arthurian legends.

Her love for Lukien is not the only secret Cassandra is hiding. She has a stomach cancer, one that will kill her unless Lukien can retrieve the mythic Eyes of God from Jador, across the desert. But when Lukien returns with one of the Eyes, the problems are only beginning.

Because of a curse on the amulets, Cassandra is doomed to never be looked upon by another human. To make matters worse, Akeela, stunned by the betrayal of Lukien and Cassandra and fueled by the power dreams of a jealous general, descends into madness. He embarks on a ruthless and single-minded mission to find the other Eye so that he can be with Cassandra again. The madness will lead him to the legendary land of Grimhold, and perhaps doom for all involved.

I used to relish the idea of 800-page reads like this one, but lately I've begun to dread them. In recent years, there's been a trend toward padding novels to bulk them up. That's not the case with "The Eyes of God." Every single word of Marco's tale serves to move the story ahead, quite an accomplishment in a novel this size.

Marco also manages to keep the tale on track, resisting the urge to get lost in a tangle of convoluted subplots. This story simply doesn't need them.

In the early going, I was a little disappointed with "The Eyes of God." It seemed to me that it was just going to be another retelling of the Arthurian legends - the good king betrayed by his queen and champion, the quest for the Holy Grail-like Eyes of God, the vision of a Utopian world destroyed by betrayal. But along the way, the story turns into much more. It's a classic tale of triumph and tragedy, well written with great depth of emotion.

As I was reading this novel, I had the feeling that I was reading something important. In 20 years, I wouldn't be surprised to hear Marco, and this book, mentioned alongside the icons of the fantasy genre. 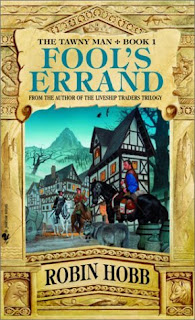 Robin Hobb is one of the best writers to emerge in the fantasy genre in the past decade, and her Farseer Trilogy is among the best series I've ever read. So I was both excited and a little apprehensive to find that she was returning to the tale of FitzChivalry Farseer and his wolf Nighteyes in her newest novel, "Fool's Errand" (Bantam Spectra).

On one hand, I was thrilled at the prospect of visiting with some old friends and finding out what happened after the events of "Assassin's Quest," the final book of the Farseer Trilogy. On the other hand, I'm weary of writers who continue to pump out books about characters to capitalize on their popularity long after their story has been told.

Happily, Hobb avoids that trap. She brings her readers back into the lives of Fitz and Nighteyes as another compelling story is unfolding around them.

FitzChivalry, the illegitimate son of Prince Chivalry and former royal assassin to King Shrewd, is believed dead by most of the people who knew him in his time at Buckkeep castle. Fitz, approaching middle age, has lived quietly with Nighteyes and his adopted son Hap in his forest cabin under the assumed name of Tom Badgerlock. But a few visitors are about to shatter that peace.

First, his former mentor Chade Fallstar visits to try to persuade Fitz to teach the Skill magic to Prince Dutiful, the heir to the throne of the Six Duchies. Then the Fool, now known as Lord Golden at court, comes to seek his assistance in finding the prince, who has gone missing. Despite his best efforts, Fitz's old friends are able to draw him back into a semblance of his former life.

But things are more complicated than a simple search for a lost prince. Sentiment against the Wit magic - the ability to communicate with animals - is running high. Those with the Old Blood are being brutally executed by angry mobs all over the Six Duchies. What's worse, Fitz suspects that Dutiful has the Wit and has been kidnapped by someone who intends to use that against the Farseer line.

As usual, Hobb is outstanding as she weaves a compelling tale of intrigue, prejudice and loyalty. Hobb excels at making her fantasy believable. Hers is not an ideal world where everything is black and white. There's no pure good or evil. Most of the choices her characters face are tough ones, with no truly right and wrong answers. It's also a world where things don't necessarily end happily, as fans of the first tales of FitzChivalry and Nighteyes can attest.

Hobb's fans won't be disappointed with this latest installment. "Fool's Errand" lives up to the legacy of the Farseer Trilogy. For those who haven't read Hobb, the book offers a good opportunity to get acquainted. If you like a good fantasy tale, "Fool's Errand" is tough to beat.