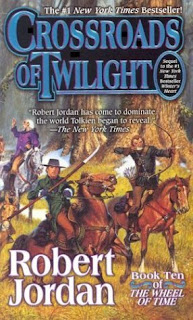 Upon finishing Robert Jordan's last book, I threw it across the room and swore I'd never read another volume of "The Wheel of Time." But when "Crossroads of Twilight" ($29.95, Tor) hit shelves last month, I felt like there was some unfinished business between myself and Mr. Jordan. After all, I've spent more than a decade with this series and invested my time into reading the nearly 10,000 pages so far. I really wanted to see how everything turns out. Against my better judgment, I borrowed a copy.

I'd love to offer a plot summary here, but I can't. There isn't one. In fact, the main story of "The Wheel of Time" hasn't moved forward a single inch in four books and nearly 4,000 pages. "Crossroads of Twilight" again gets bogged down in Jordan's out-of-control subplots. The series has turned into a gigantic soap opera, but instead of getting snippets of the myriad subplots daily, Jordan's fans have to wait 1-2 years between installments.

I like complex stories as much as the next reader, but there's a point where complex crosses the line into confounding. Jordan has created so many forks in the road that he can spend precious little time with any of them in nearly 700 pages. I had hoped he'd begin to tie up some of those loose ends in the tenth volume, but no such luck. I believe the truth is that Jordan doesn't have any idea how the story is going to end. I get the feeling he's just buying time until he figures it out.

This is all the more frustrating because the series had such promise. Back when I first picked up "Eye of the World" in the early 1990s, I thought it was the best thing since Tolkien. It was a well-written, intriguing opening to what was supposed to be a five or seven book series. Now, the estimate is 13, but based on the pace of the last four, I'd say that's a generous estimate. At this rate, it may never end.

Once again, Jordan has topped the best seller list, so apparently someone is still interested, but "Crossroads" was one of the most disappointing reads I've ever forced myself through - even worse than I expected. If you haven't picked it up yet, you won't miss much by skipping it and waiting for the next one.

I can only hope that one day someone releases an abridged version that boils the good parts of the story down to that five or seven book series. I'd really like to find out how things turn out, but I don't think I can make it through another volume like "Crossroads."

The only good thing I can say about this book is at least I didn't spend any money on it this time. 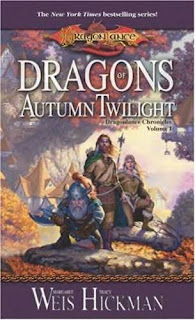 When I saw the new hardcover version of "Dragons of Autumn Twilight" by Margaret Weis and Tracy Hickman ($24.95, Wizards of the Coast), my first reaction was excitement. I didn't have a hardcover version, and this one, designed to match their most recent "War of Souls" trilogy, was gorgeous.

I cut my fantasy teeth on Weis and Hickman's first two Dragonlance trilogies. They were my first foray into the genre after Tolkien, and they hold a special place in my heart.

My next reaction, though, was a little uncertainty. While I read the "Chronicles" trilogy several times and loved them way back when, it's been at least 10 or 12 years since I last picked them up. In that time, I've read a lot of books and discovered some of the best writers the genre has to offer. My perspective is different now, and I was concerned that these books wouldn't live up to the memory I had of them.

But when I opened up "Dragons of Autumn Twilight" and started reading, it was like slipping into an old, worn, comfortable pair of jeans. It was an opportunity to take a stroll with a few old friends that I haven't visited with in quite a while.

Before going their separate ways, a group of companions agrees to meet five years later at the Inn of the Last Home in Solace. When the time comes, they find their way home, but one of their number is missing and all of them are changed.

The world is changing as well. Wild rumors of the old gods, who long ago abandoned the world of Krynn, are flying. Now, the companions are faced with proof that the old gods are returning, in the form of a blue crystal staff carried by a plainswoman whose fate has become intertwined with theirs. But they're not the only ones that know about the staff. They soon find themselves on the run from strange lizard-like creatures called draconians whose mission is to retrieve the staff. But for who?

The most ominous change, though, is the return of a creature of legend - a creature believed by most to be a child's tale. For the first time in ages, dragons again roam the skies of Krynn.

I can still remember how enthralled I was with this book the first time I read it. It grabbed me and sucked me in. I came to love the characters - the irrepressible Tasslehoff, the dour Tanis, the strict Sturm, the gruff Flint, the loyal Caramon, and of course, the frail, acid-tongued wizard Raistlin Majere, who would become one of my favorite characters. They were all like good friends to me.

Reading "Dragons of Autumn Twilight" this time, I recalled that sense of wonder that I first approached the book with in those days when I was taking my first tentative steps into the fantasy genre. I was able to put aside the jaded spotter of clichés that I've somehow become over the years and simply enjoy the tale.

To me, that's a gift, and I look forward to reliving the second leg of the journey with those companions in the near future.

While the Dragonlance Chronicles may not have the depth and scope of some of the other classics of fantasy that I've discovered in the intervening years, when it comes to a pure fantasy adventure tale, it's still hard to beat.