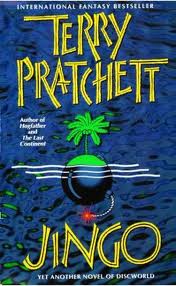 On my list of favorite authors Terry Pratchett ranks high. In fact, I'd say he's not far behind Poe and Tolkien.

That said, I've been a little disappointed in his last two offerings, Maskerade, and now Jingo. While both were very good books, neither has really lived up to my expectations from Pratchett.

In Jingo, a new island rises out of the sea, and both Ankh-Morpork and Al-Khali claim it. War threatens and chaos erupts from all sides. A good story, but I think perhaps the story gets lost occasionally in a more slapstick type of comedy than Pratchett's older work.

That's not to say it wasn't funny. There were moments that had me rolling on the floor. But it's just missing something that his earlier books had.

But, at the end of the day Pterry is still, in my opinion, the funniest writer in the business. I just wish it didn't take so long for us to get his books here in the states.