Review: "Side Jobs" by Jim Butcher 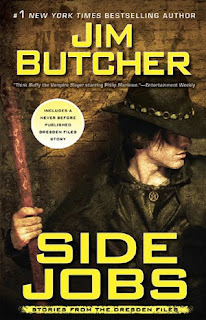 For those left hanging and wondering by the somewhat shocking end to Jim Butcher’s last novel of the Dresden Files, “Changes,” here’s a collection that will help hold you over until the next installment this summer when we can find out just what the heck is going on with Harry.

“Side Jobs” ($25.95, Roc) collects a variety of Dresden stories from various anthologies over the years, and also gives readers a look at two never-before-published stories. Those two will likely be of most interest to fans.

The first, “A Restoration of Faith,” opens the book and also happens to be Butcher’s first tale of wizard private investigator Harry Dresden as he saves a runaway girl (who really doesn’t care to be saved) from a bridge troll in Chicago. It was not published, and you can see why when you read it, though it’s not as bad as Butcher seems to think judging by his opening commentary. I’ve read worse stories that did get published. 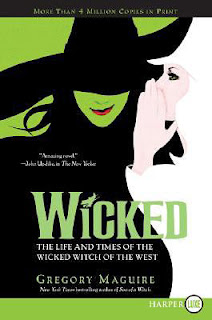 Here’s the first effort in my campaign to catch up with some of the books that I’ve missed while trying to keep my reviews current over the last decade or so. I’ve wanted to read Gregory Maguire’s “Wicked: The Life and Times of the Wicked Witch of the West” ($7.99, Harper) for quite a while, but just never have gotten around to it. Upon finishing it, my feelings were mixed.

The story, of course, is an attempt to give the reader an alternate view of, perhaps, one of the greatest villains of all time, the Wicked Witch of the West. It begins with her birth to a man consumed by his religion and his bored and unhappy wife, and follows her life, more or less, to her ultimate end at the hands of Dorothy. It attempts to paint the Wicked Witch, Elphaba, as a more sympathetic character than in L. Frank Baum’s book or the classic film. In some ways, Maguire succeeds, but in others he fails. While we do see some flashes of nobility in Elphaba’s character here and there, by and large, she remains mean, nasty, unlikable and unsympathetic. Through the story, (which has nothing to do with Baum’s books or the movie until toward the end) we begin to understand more about her and how she became the villain she is, but we’re also not really that upset when Dorothy douses her with a pail of water at the end, either.

Something a little different

For the few folks that may still be following my infrequent reviews, there will be a slight change coming to this blog. Hopefully, there will be more reviews and content than in recent months, but the books reviewed may be a little different.

The realities of the newspaper business these days mean that there's less space for and less interest in things like book reviews. The bad news is that I no longer really have a print outlet for my reviews. The good news is that this will give me an opportunity to go back and take a look at some books that I missed or skipped in recent years. For the past 10 years or so, I've passed on a lot of books that I wanted to read, trying to keep my reading fairly current for the reviews. Now I have the chance to revisit some of those.

So, for those still reading, there will still be reviews here, and hopefully more. There will still be some new releases mixed in, too, but you'll most likely see a lot of older books mixed in, and with the new addition of my Nook, possibly some ebook releases. Maybe it will help you guys discover something you missed as well.

Review: "The Gathering Storm" by Brandon Sanderson and Robert Jordan 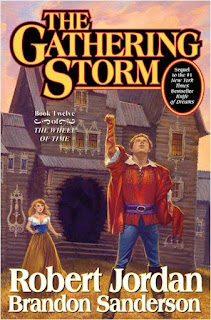 For the few folks who are still following my infrequent book reviews, my frustration with Robert Jordan’s Wheel of Time series is certainly no secret. After being pulled in by the excellent first book of the series, “The Eye of the World,” in 1990, and proclaiming Jordan as the next Tolkien to all of my friends who would listen with the following few books, he began to lose the thread of the story. I gave up on the series a few books back after slogging through several 1,000-page plus doorstops in which Jordan’s storyline barely moved forward at all.

Then, of course, Jordan passed away in 2007, before he was able to complete the unwieldy series. Brandon Sanderson was tapped by Jordan’s family to write the final book of the Wheel of Time based on Jordan’s notes and conversations with his wife in his final days in which he laid out how the story should end. Shortly thereafter, it was announced that the “final” book would now be three books, which immediately made me assume that it would be business as usual with this series, keeping the frustrating story going even farther beyond its life cycle.

My plan was always to return for the final book, if it ever arrived, so that I could see how things turned out with these characters I’ve known for more than 20 years now. My curiosity about how Sanderson would continue the story finally got the best of me, though, and a month or so ago, I picked up the paperback version of “The Gathering Storm” ($9.99, Tor). I’m pleasantly surprised.