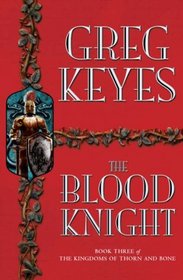 Epic fantasy can be a tricky thing. Fans of the genre expect complex stories with tangled subplots, but sometimes they can get too tangled. Just ask Robert Jordan, whose once-promising Wheel of Time series grew so many heads that it stalled somewhere around book six and has only barely inched forward in the last four or five volumes.

With "The Blood Knight" ($25.95, Del Rey), the third of four installments of his Kingdom of Thorn and Bone series, Greg Keyes has managed to weave his subplots seamlessly and avoid the pitfalls that so many other authors have fallen into.

In this book, Anne Dare, the exiled princess and rightful heir to the throne of Crotheny, has returned to try to muster support and remove her usurper uncle Robert from the throne. While that battle rages, there's a bigger battle being fought in the world as a whole. The legendary Briar King walks the earth again, some say to reclaim it from man, and with him comes a host of creatures thought to be children's tales and myths. Just whose side they're on is open to debate.

The head-hopping style that Keyes adopts in his storylines will immediately remind readers of George R.R. Martin's recent works, but Keyes manages to stick rigidly with his tale with few wasted words. Action and conflict rule every line of the book with little time for the overlong descriptive passages and asides that often crop up in the genre. Keyes gives his readers what they need to know, when they need to know it, and the result is a fast-paced sprint to the finish in a genre that often prefers meandering strolls. It's a refreshing approach that keeps you wondering what's around the next corner.

Keyes' characters are likeable and easy to connect with. And just when you think he's falling into the conventions of the genre, he surprises you with a deft twist.

"The Blood Knight" should satisfy the most hardcore epic fantasy purists as well as the occasional reader of the genre. A lot of the other writers working in the genre could take a few lessons from Keyes.