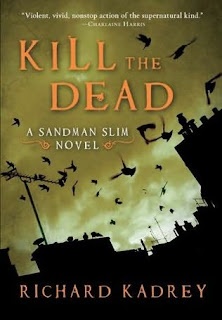 Richard Kadrey continues his tale of James Stark, aka Sandman Slim, in his latest efford, “Kill the Dead” ($22.99, Eos).

Stark is a man who has literally been through Hell. A feud with a rival magician sent him there, but he clawed his way out. He now lives in Los Angeles and, much to his disappointment, is regaining his humanity. The layers of scars from wounds suffered in the arenas of Hell that he uses as armor are beginning to fade. He runs a video store and takes occasional assignments from the Golden Vigil, a secret government organization run by an angel that deals with supernatural issues. His luck isn’t going so well. Then he gets a call from Lucifer. He’ll be in town working on a biographical film about himself, and he wants Sandman Slim, a legend in the supernatural community, by his side as a bodyguard. Stark accepts the assignment, but it leads him in even stranger directions. 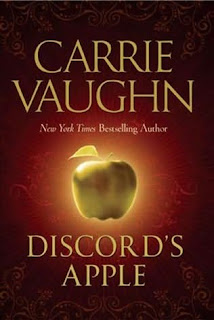 When Evie Walker returns home from Los Angeles to the small town of Hope’s Fort, Colo., to care for her terminally ill father, she gets quite a bit more than she bargained for in Carrie Vaughn’s “Discord’s Apple” ($23.99, Tor).

Walker lives in a world that has broken down. Terrorist attacks have led to martial law in many areas, including her new home of Los Angeles. Most of the nations of the world are at odds with each other and on the brink of open warfare. In this environment, she writes a comic book somewhat similar to World War II-era Captain America that features a patriotic military team and revolves around current events. But she puts her life on hold when she learns of her father’s illness to head back to a place she thought she’d left forever.

Soon after she returns, strange people begin to appear in Hope’s Fort and strange things begin to happen. When a woman shows up asking for something in the storeroom of her father’s house, Evie discovers a warehouse of mythical and magical treasures from throughout the ages. Her family has been charged with guarding the treasures for generations, and she is destined to take up the mantle from her father whether she likes it or not. But things are changing rapidly, and not everyone who comes looking for something from the storeroom has a right to it.